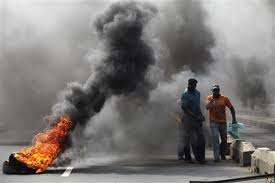 06 January 2012, Sweetcrude, LAGOS – For the third consecutive day, protests in different parts of Nigeria over the New Year Day’s removal of fuel subsidy continued Thursday in some parts of the country ahead of Organised Labour’s nationwide industrial action billed for Monday.

Protesters grounded Ibadan, Benin and Kaduna Thusday as the three-day peaceful protest in the commercial city of Kano turned violent with about 44 persons injured.

The Nigerian Bar Association Ikeja Branch, protesting against the increase in fuel prices, yesterday in Lagos.

However, Amnesty International and the National Human Rights Commission, NHRC, have urged the police to shun use of maximum force to stop protesters, whom they said had the fundamental rights to stage peaceful protests as part of the tenets of a democratic society.

How peaceful protest turned violent in Kano
No fewer than 44 persons were seriously injured in Kano State in the early hours of Thusday, when the police and other security agencies reportedly used maximum force to disperse thousands of protesters who had spent three days at Tahir Square in the city centre over fuel subsidy removal that has led to the increase in petrol price from N65 to between N138 and N250 per litre across the country.

Eye witnesses said the incident occurred when some of the protesters were asleep after a covenant was signed between Muslims and their Christian brothers on right to worship there and peaceful co-existence.

It was learnt that the police fired several canisters of tear-gas at the sleeping crowd before unleashing violence on the protesters.

Sources further said that in the ensuing confusion, several people sustained various degrees of injury, while six were arrested but later released following the intervention of some leaders of the protesters.

It was learnt that the Coaster Bus belonging to the Bayero University Kano, Students Union Government, SUG, was vandalised in the unprovoked attack, while hundreds of motorcycles belonging to the tenants of the Square were seized by the police.

The action of the police has already triggered tension in the city of over nine million people as uneasy calm now reigns in the area.

Unconfirmed reports however, said that the police had promised to compensate the SUG over their loss but efforts to confirm the matter from leader of the Group, Comrade Muhammad Hamisu, failed as he could not be reached on his cell phone. 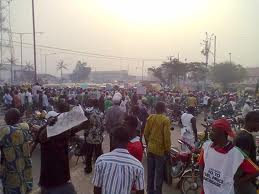 The peaceful protest, which started at about 6:30am, commenced at Ring Road, the heart of the city, forcing banks and other business organizations to close shop until 12pm. The protesters called for the immediate resignation of the Minister of Finance, Dr Ngozi Okonjo Iweala, accusing her of coming to implement the agenda of the International Monetary Fund, IMF, and the World Bank.

Some of the placards read: “Jonathan you are a disappointment, resign now!” ” Edo people say no to fuel subsidy removal!” “Jonathan, we are disappointed in you.” “Resign if you are incapable.”

A combined unit of mobile policemen and soldiers followed the protesters to ensure that the peaceful protest was not hijacked by hoodlums.

Dr Ugbodaga who addressed the crowd, lamented that Nigerians had suffered for too long and argued that instead of removing subsidy, the government should cut the cost of governance and fix the economy.

In a letter addressed to President Goodluck Jonathan, which the Coalition handed over to Governor Adams Oshiomhole at Government House, they said: “In the interest of peace, unity and progress in Nigeria, we recommend the immediate reversal of the price of fuel to N65 in the first instance and thereafter to N39.50k, which is the ideal price of a litre of petrol. Restore the capacities of the four refineries in the country immediately and take full control of the oil industry. Drastically reduce the cost of governance and use the proceeds to fund development projects and the welfare of Nigerians. Jettison all market fundamentalist policies/programmes of the IMF/World Bank.

“The ideas and development policies of the two Bretton Woods Institutions have failed repeatedly in different parts of the world. Therefore, the current Minister of Finance and all other agents of the World Bank and IMF in the Federal Executive Council should be sacked if they fail to resign honourably. We believe that Nigeria must reclaim its sovereignty from the IMF, the World Bank and Multinational Corporations, MNCs.”

Lamenting that at least one person had been killed and several others injured when the police attacked protesters, Paule Rigaud, Amnesty International’s Deputy Director for Africa, said: “The police have a duty to protect lives and property and uphold the rule of law. It is therefore completely unacceptable for them to use live ammunition against protesters.

“The Nigerian authorities should respect and protect peoples’ rights to freedom of expression guaranteed by the Nigerian constitution, and should instruct the police force to refrain from shooting at protesters.”

Protesters in Kaduna, Thursday
Under a controversial regulation, known as “Police Force Order 237”, police officers can shoot at rioters or protesters whether or not they pose a threat to life. The regulation directs officers to fire “at the knees of the rioters” and explicitly prohibits firing in the air.

“Force Order 237 is being abused by police officers to commit, justify and cover up illegal killings at every given opportunity. This regulation goes against international standards and should be repealed immediately,” she said.

With more protests expected on January 9 and 11, Rigaud said it was essential that the Nigerian police publicly announce that the use of lethal force was only allowed when strictly unavoidable to protect life as “this simple step could make a big difference to the number of unlawful police killings we are seeing in Nigeria.”

Let’s uphold respect for human rights – NHRC
In like manner, the National Human Rights Commission, NHRC, urged the government, protesters and all stakeholders to respect human rights with regards to the exercise of free expression, assembly and associated rights, including the right to protest.