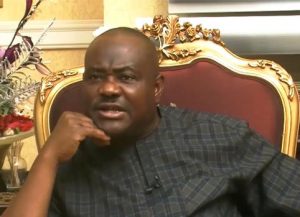 30 January 2019, Sweetcrude, Port Harcourt — Rivers State Governor, Nyesom Wike has accused the Federal Government of deliberately refusing to provide the counterpart funding of N60 billion for the construction of the Bonny-Bodo road project in the state.

Addressing thousands of supporters during the PDP Campaign Rally in Bonny Island, Governor Wike said the refusal of the President Muhammadu Buhari-led administration to pay the counterpart fund for the project is a proof that his hatred for the Niger Delta is irreversible.

Wike stated that it was regrettable that even when the Nigerian Liquefied Natural Gas Company Limited, NLNG, has already paid their own part, the Federal Government has refused to pay her part, due to crass hatred for the region.

The governor urged the people of Bonny Kingdom to vote the PDP presidential candidate, Atiku Abubakar for the creation of employment opportunities.

He said that the 2019 general elections represent a contest between darkness and light, saying that Nigerians must vote out the darkness that APC represents.

“But they have gone to take $1billion from the Excess Crude Accounts to say they are fighting insurgency. One billion dollars is N370 billion. To bring N60 billion to make Bonny people travel home by road is difficult.

He said though the PDP has never lost an election in Bonny Island, the people of the area must be vigilant to stop the APC Federal Government from robbing them of their mandate.

Also, the Deputy Governor, Dr. Ipalibo Harry-Banigo, lamented that the APC Federal Government makes empty promises in Rivers State without fulfilling any of them.