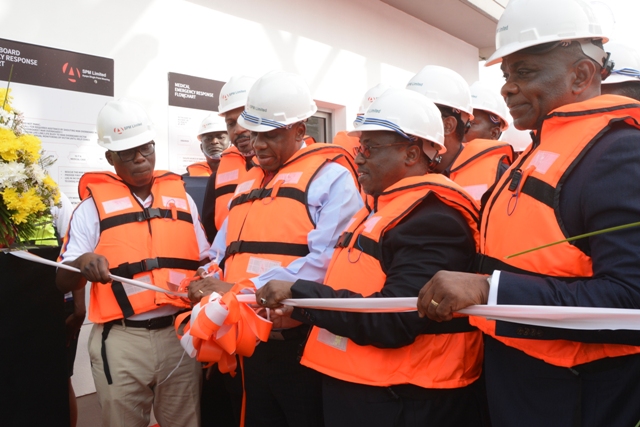 *Mr. Rotimi Amaech, 3rd-right, cutting the tape to commission the Lagos Midstream Jetty (LMJ) at the Apapa Harbour in Lagos, while Baru and others watch with interest.

In a statement in Abuja, Group Managing Director of the Corporation, Mr. Maikanti Baru, who stated this while commissioning the

He said, “NNPC will continue to support all players in the downstream sector of the oil and gas industry towards efficient product supply and distribution across the country.”

Baru added that the development of the much-needed critical infrastructure should not be seen as the sole responsibility of government, adding that good infrastructure plays a critical role in ending extreme poverty and increasing shared prosperity among the citizenry.

He noted that the NNPC would continue to collaborate with the private sector to develop innovative and profitable solutions that would not only aid the development of the country but also ease the way of doing business.

He charged the private sector to continuously look for opportunities to partner with the public sector to enable the realisation of the country’s economic goals.

“The reality is that we all have a role to play in developing and moving the economy forward, an economy that will benefit us all today and generations yet unborn,” Baru maintained.

He explained that the commissioning of the jetty was in line with NNPC’s corporate vision of 12 Business Focus Areas (12 BUFA), one of which is centred on the provision of critical oil and gas infrastructure.

Baru, who commended Oando Plc for initiating the idea of the LMJ, said the jetty was an encouraging example of Public Private Partnership (PPP) and a further proof that both the private and public sector have come to the realisation that infrastructural investment is a shared responsibility requiring collective leadership, learning and innovation.

He explained that the N54.4 billion worth LMJ was conceived as an innovative industry solution to the perennial challenges marketers faced in the importation of petroleum products.

“Today we have delivered a first-class engineering piece that meets global standards, it’s the first of its kind in the sub-Saharan Africa and will be of invaluable benefit to the industry and nation at large,” he said.

Also speaking at the occasion, Minister of Transport, Mr. Rotimi Amaechi congratulated OVH Energy on the feat, stressing that investments such as LMJ were a clear indication of growth in the nation’s economy.
Conceived by ASPM Limited, a subsidiary of OVH Energy Limited (an Oando Plc Licencee), the NNPC said the LMJ is West Africa’s first privately owned mid-stream jetty, located at the Lagos Apapa Harbour.

The NNPC noted that the LMJ will allow up to 45,000 Dead Weight (DWT) vessels to berth and discharge products while easing out the congestion around the Apapa corridor.

The Jetty, which is also available for the use of all sector players – peers and competitors alike, the NNPC explained, is expected to boost the delivery of petroleum products to terminals around the Apapa axis and the nation at large.