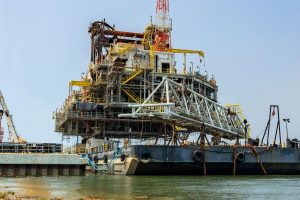 *The load-out of the DSO Meren – Sonam platform topside from the Nigerdock facility on Snake Island.

It added that the deal with Shell, Project Santolina, was for the NNPC/Shell Petroleum Development Company/Total Exploration and Production Nigeria/Nigerian Agip Oil Company Joint Venture.

It disclosed that the pproject Santolina deal would ensure an accelerated upstream production comprising 156 development activities across 12 OMLs and 30 fields in the Niger Delta.