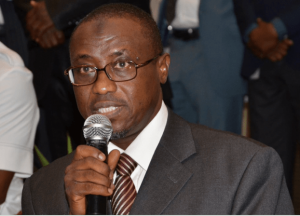 21 March 2018, Sweetcrude, Abuja – The Nigerian National Petroleum Corporation (NNPC) has announced that it plans to drill four wells in the Chad and Gongola Basins.

Group Managing Director of the Corporation, Dr. Maikanti Baru, made the announcement while speaking at the Nigerian Mining and Geosciences Society (NMGS) Conference in Kano, on Tuesday, shortly after being conferred with the honourary fellowship of the Society.

Speaking on NNPC’s latest efforts to find crude in some inland basins, notably in the in the Chad Basin, Baru said the Corporation plans to drill four wells in areas that it has acquired 1,961 square kilometre 3D seismic data out of 3,550kmsq planned.

He said NNPC would be going into the deeper Maiduguri sub-basin to acquire more 3D seismic data as soon as normalcy returns to the Chad basin.

“While waiting for normalcy to return to the Chad Basin, we have stepped up efforts in the Lower Benue trough. So far, we have acquired 20km of 2D data out of the planned 455km 2d seismic data,” he added.

On the Gongola Basin, Dr. Baru said four wells were also being planned for drilling to further test the prospects identified around Kolmani River-1, Nasara-1 and Kuzari-1 in 2018.

Meanwhile, the NNPC GMD has expressed the Corporation’s readiness to collaborate with the Nigerian Mining and Geosciences Society (NMGS) towards growing the nation’s abundant hydrocarbon reserves.

Dr. Baru acknowledged the “indispensable role” played by geoscientists, mining engineers as well as metallurgists towards the development of the nation’s Oil and Gas Industry, adding NMGS was critical to the attainment of the NNPC’s core mandate.

“NNPC pledges to continue to work with you and every willing partner in the search for more hydrocarbon deposits in the country,” he said.

He said it was in line with this collaboration that the corporation developed a strategy involving various geoscience departments in the country’s tertiary institutions which culminated in the renewed search for hydrocarbon deposits in the inland basins.

“Our search is primarily targeted at increasing the hydrocarbon reserves of the country and also to harness these resources which may be in other parts of the country,” he added.

“I pledge on behalf of the NNPC that their sacrifice shall not be in vain. There is no better way to honour the efforts of our gallant heroes than to continue the good work they died for,” he added.

He thanked the Society for conferring on him with their Fellowship, saying that the recognition would spur him to rededicate himself towards giving his all for the Oil and Gas Industry and by extension the country.

He pledged to re-dedicate himself to the lofty ideals of NGMS, stressing that he would not disappoint the Society in the trust it reposed in him.

Earlier in his speech, the President of the NMGS, Prof. Silas Dada said the Society was honounring the GMD for his untiring commitment and service to the growth of the Nigerian Oil and Gas Industry.

Established in 1977 for the advancement and practice of mining, earth sciences and metallurgy, the Nigerian Mining and Geosciences Society (NMGS) is charged with upholding the ethics and safeguarding the interests of the professions covered by the society.