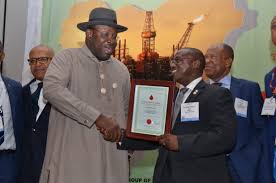 06 May 2018, Sweetcrude, Lagos — The Nigeria National Petroleum Corporation, NNPC, has promised to give necessary supports to viable projects in Bayelsa state.

The Corporation’s Group Managing Director, Maikanti Baru made the pledge at the just-concluded visit to the NNPC pavilion at the ongoing 50th edition of the Offshore Technology Conference, OTC in Houston, United States, on Wednesday.

Baru who described Bayelsa State as a trailblazer said the NNPC would collaborate with the state through evaluating and ensuring that only viable projects are allowed in the various world-class facilities being developed there.

He also commended Bayelsa for being the only Nigerian state participating at the annual oil and gas exhibition, calling on other states to emulate it in its quest to attract investment opportunities and eventually become economically prosperous.

The Group Managing Director further observed that the laudable investment initiatives by the Bayelsa State would not only shore up the political economy of the state but would also improve that of its neighbouring states of Rivers, Delta, Edo, and Akwa-Ibom states and indeed the entire country.

He said when the Governor visited the OTC last year and subsequently paid the NNPC a visit, they discussed Nigeria’s potentials to compete with its global peers through endeavours as the construction of industrial parks and all the associated infrastructure required to do that.

‘‘If you build an industrial park, you are building an area where investors will come and have ready-made feedstock. Whether a refinery or fertilizer plant, the plot must be set and by being set I mean it will have all the necessary utilities and the feedstock piped to that location. Therefore, all that is needed for the investors to do is to site their plant, connect to the feedstock and commence operations,” Baru observed.

Baru further stated that an industrial park would have housing facilities, schools, sporting, entertainment facilities as well as an airport, which can host heavy lift aircrafts as well as wide bodied ones.

He further stated his excitement about the work done by the state government on a 3.5Km runway airport that can land a 747, or an A380, arguably the heaviest lift aircraft in the world today.

On the Deep-Sea Port, he also commended the state for being the only one in Nigeria that has a 14-metre draft which would soon be deepened to 20 metres.

“With the completion of the Deep-Sea Port, there will be a lot of movement of goods, facilities and heavy equipment vessels away from Lagos Port to the port in Bayelsa. This will surely be a great relief for the various industries, as goods would be brought closer to the locations of use and at the end of it all, it will be good for the Nigerian economy,” he concluded.

Speaking, the Bayelsa State Governor, Seriake Dickson, extolled, Baru, saying he has advanced the course of transparency and innovation in the NNPC.

“I would like to commend and congratulate the GMD for the great work he and members of his management team are doing at the NNPC. Under his able leadership, he has truly advanced the frontiers of transparency and innovation,” Governor Dickson stated.

Dickson, who said he was impressed with the investment opportunities showcased by the NNPC at its stand, also expressed confidence that the corporation was now ready to play in the big league internationally.

He thanked the Group Managing Director for leading the Nigerian community at the OTC, a gesture which he said had not only encouraged the Nigerian investors but had equally underscored the importance of using technology to create jobs and attract investments into the country.

According to the Governor, Bayelsa State would partner with the NNPC to actualize its lofty dream of becoming the “Houston of Oil and Gas in Nigeria and Africa” in the nearby future.

He said following its presence at the last OTC in 2017, the state had fruitful interactions with the NNPC which did not only sharpened its perspectives on oil and gas investments, but also led to several steps taken towards marketing Bayelsa to the rest of the global investing community.

Dickson said his government had created the enabling environment for investments to thrive in Bayelsa State, especially in the oil and gas sector, to guarantee high return on investment.