A major step in the activation of President Goodluck Jonathan’s Gas Revolution agenda was taken during the week when a team of oil and gas experts and foreign investors arrived the historic city of Koko in Warri North Local Government Area of Delta State to commence preliminary site inspection of the planned Petrochemical plant and Gas processing facilities envisaged to emerge as Africa’s largest industrial complex.

The massive undertaking which is projected to generate up to $16billion investment entails the construction of 1.3million tonne per annum Polypropylene and Polyethylene plant to be built by Xenel in concert with NNPC and other investors.

Nagarjuna will construct three fertilizer plants each with capacity of 1.3 million tonnes per annum all to be located within the Koko Free Trade Zone. The India leading agro processing company will also build blending plants across the country including Delta State to ensure the blending of fertilizers to align with the soil requirements across the various agro zones in Nigeria.

It is envisaged that the approach will enable improved yield which in turn will galvanize numerous agro and food processing industries around the locality of the blending plants-creating industrialization in otherwise rural areas. Already the Chevron/NNPC JV is programmed to develop the gas to supply the fertilizer plants.

The Koko petrochemical plant and fertilizer facilities will be supported by a massive Central Processing Facility, CPF, capable of processing 1billion cubic feet of gas per day. This CPF alongside the others will be the brain-box for the whole industrialization agenda. At these CPFs, wet gas from the wells will be gathered and processed, producing the dry gas and natural gas liquids that will be feedstock for the fertilizer, power and petrochemicals plants.

Speaking at the end of the preliminary aerial survey of the entire Koko Free Trade Zone, Dr. Ige stated that the multibillion dollar CPF will be executed by some indigenous companies which include Oando and Sahara Energy alongside Shell, Chevron and the NNPC.

“This is the beginning of a massive industrial revolution not only for Delta state but the entire nation anchored on petrochemicals. Our expectations going forward is that over the next few weeks NNPC in concert with the state government and the investors will move into top gear ahead of the planned engineering works in the months and years ahead,’’ Dr. Ige stated.

Receiving the Team in his palace the Olaraja of Koko, Chief Victor Nana amid cheers and conviviality from the appreciative Koko community thanked the NNPC and the foreign investors for taking bold steps to actualize what locals have dubbed the Koko dream. 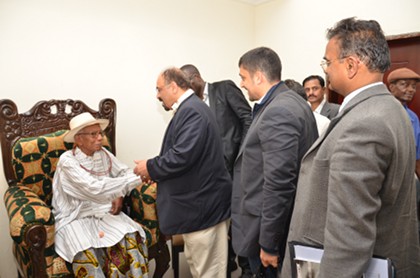 The Monarch pledged the commitment of indigenes of the community to provide 100 percent cooperation to the NNPC and all stakeholders towards the realisation of the project.
Similar sentiment was expressed by Hon. Friday Ekpen, the Chairman of the Koko Youth Association.

Also speaking, the Delta State Governor, Dr. Emmanuel Uduaghan expressed delight at the activation of the project also called on the Federal Government to accelerate the planned dredging of the Koko Port waterways to allow for the entrance of heavy vessels in good time for the takeoff of the project.

The Governor however hinted that the State may be compelled to take up the dredging project on behalf of the Federal Government to fast track the planned construction of the petrochemical plant.
Uduaghan described the Koko dream as a project capable of transforming the economic landscape of not only Delta state but the entire nation.

Matouq Jannah, head of the Xenel delegation enthused that the Corporation has the experience and competence to transform the Koko dream into a massive reality.

“ We have done this in Saudi Arabia in the 1970s and early 1980s so nobody can tell me that we cannot do the same in Delta State,’’ Jannah expressed.