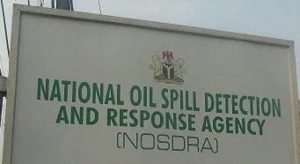 Port Harcourt — The National Oil Spills Detection and Response Agency, NOSDRA, has absolved oil producing companies in the country from blame in the reported pollution of the Niger Delta coastline that has resulted in the massive death of fishes in the coastline in Delta, Rivers and Bayelsa states.

NOSDRA, in its recently-released report on the issue, said the death of fishes in the Niger Delta coastline was not a result of oil pollution but of pollution from heavy metals from industrial and domestic wastes.

It said the discharge of toxic materials into the Atlantic ocean may have come from land as the wastes from domestic and industrial sources often empties into the water body.

Director-General of NOSDRA, Mr. Idris Musa, said that, according to investigation carried out by the agency and five other Federal Government institutions, high toxicity of the dead fishes and water samples was caused by toxic waste metals and not oil pollution.

The other agencies involved in the investigation with NOSDRA are the Nigerian Maritime Administration and Safety Agency, NIMASA; Nigerian Institute of Oceanography and Marine Research, NIOMR; National Environmental Standards and Regulations Enforcement Agency, NESREA; and the Federal Institute for Fisheries Research, FIFR.

The outcome of the investigation is at variance with the original allegation, which blamed Shell Petroleum Development Company of Nigeria, SPDC, for polluting the coastline from its Forcados operations in Delta State. Part of the allegation also claimed that the dead fishes were being killed by oil seepage from offshore platforms operated by oil companies.

But, Musa stressed that test results from investigation conducted confirmed its preliminary findings that the fishes were not being killed by oil pollution, as the levels of hydrocarbon in the samples tested were within regulatory limits.

he NOSDRA boss stated: “The results of the laboratory tests were perused, and we make explanation on the parameters of concerns that were analysed for the purpose of clarity and understanding.

“As earlier mentioned, the findings did not show hydrocarbons as the possible cause of the death of the fishes.

“However, there were some heavy metals such as Cadmium, Chromium Copper, Zinc and Iron that exceeded regulatory standard limits in the coastlines of the three states, Delta, Bayelsa and Rivers.

“In the water samples taken at the coastline in Bayelsa State, the values of Cadmium and Iron were higher than the regulatory standards limit.

“The values of the parameters in sediments were substantially within regulatory limits. The values of chromium and copper in the sampled dead fishes’ tissue were slightly higher than the European Union Standards limits.”

The NOSDRA director general, who ruled out oil pollution as cause of the dead fishes, maintained that the plausible causes could partially be attributable to other human-related pollution activities which are probably land-based.

He added: “In this case, while it is commonly observed that most industrial and domestic wastes which contain heavy metals such as cadmium, iron, zinc, copper found their ways into drainages and onward transfer to the water bodies.

“Their deleterious impact may be negative to aquatic species, other mammals and human beings. The main sources of these are batteries, galvanised pipes, fertilisers, sewage sludge and plastics.

“Such may be the case in the analyses of dead fishes found at the coastline in Delta and Bayelsa where chromium was found in fish tissue.

“Copper was also found in the fish tissue sampled in Delta State but not in those of Bayelsa and Rivers State.

“Furthermore, a sudden release of heavy metals is not likely to kill fishes except those trapped at the point of release because, cadmium in particular is highly toxic.

“Long term accumulation (chronic) rather than short term (acute) heavy metals could cause the death of fishes. It is also curious that a specific species of fish is allegedly involved in the circumstance under consideration.”

It should be noted that earlier in April this year, NOSDRA announced it was coordinating a multi-agency investigation, aimed at unraveling the cause of the reported massive death of fishes within the nation’s territorial waters.