Now that Wike and Amaechi are talking … 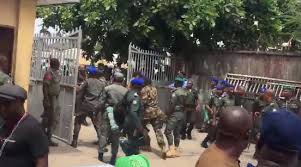 *Security operatives struggling to contain a surging crowd during the last election.

Port Harcourt — It is a sign of the times that remarks by two men from Rivers State are making us sit up and take note. The remarks have lit a candle of hope for the long-suffering people of Rivers State and instigated over-the-top speculations that the sun will soon shine again in the Garden City. The State Governor Nyesom Wike set the ball rolling in a state-wide broadcast when the All Progressives Congress in Rivers State lost all election-related suits at the Supreme Court. The Governor made what appeared to be an impassioned appeal for an end to “divisive politics in our state.” As you would expect, if Wike talks about politics in Rivers State, he will mention his predecessor, Rotimi Amaechi, and he didn’t disappoint. But in a marked departure from the past, the reference was not contumelious or adversarial but reconciliatory and statesmanlike. He said: “I appeal to the APC and the Minister of Transportation to join hands with us to move our dear state forward. We cannot as leaders continue to remain divided and expect the government to deliver on its responsibilities to our people. Let us from henceforth seek common ground instead of allowing our differences to retard our march to progress.”

In the same broadcast, the Governor directed the Attorney General to review all “criminal proceedings filed against any person by the state and directly related to political activities prior to the 2019 general elections and make appropriate recommendations to me for necessary action to promote reconciliation.” If you don’t understand what this implies, then I don’t either! The Minister responded (this is our interpretation) in remarks to mark Easter, in which he called for unity in the state. He said: “Rivers State has endured a tortuous political season which saw political parties jostle and cajole the people to make choices. And our state which was known and respected as the treasure base of the nation is now almost always in the news for the wrong reasons. This is not the Rivers State of our dreams.”

When the two men speak of violence and acrimony in Rivers State, they confirm what we know, see and experience. When they talk about unity and progress in Rivers State, they confirm what we expect, pray and fast for. Indeed, the quarrel between Wike and Amaechi and the concomitant drawbacks represent one of the darkest moments in the history of Rivers State since it was created on 27th May 1967. The civil war years were “better” because you expected nothing good and proper in a war situation. In contrast, the acrimony between these two famous sons of our dear state (to borrow the word of the Governor) has set development back by decades, poisoned the social and political atmosphere and forced people to view their loyalty and love for Rivers State, not on your pedigree or current actions but on the side of the political divide you stand. That is to say, if you are in one camp, the other camp ostracizes and denounces you as a traitor to the commonwealth. And the youths, ever ready, willing and able have become willing tools in the hands of influence peddlers and benefit captors. Rivers people will not forgive me if I delve into the causes of the quarrel because that will mean trying to justify the madness.

So what do we make of the calm words we’ve just heard? We start by congratulating them for delivering reasonably decent speeches. But they must realise that the best speech remains mere words until expectations are met. Wike must not decamp to APC, and Amaechi must also not return to PDP for peace to reign in Rivers State. What we see is a clash of egos fuelled by pride, interests, and ambition. They can remain in their respective camps to pursue their interests and ambitions and massage their egos. Even if it is a different context, the gubernatorial ambitions of Governor Akinwumi Ambode and Babajide Sanwa-Olu in Lagos holds some lessons for our brethren in Rivers State. When Ambode saw that his chances of re-election were growing dim, he went for the jugular of his presumed successor, Sanwa-Olu, labeling him as someone “unfit for office.” He presented two proof-points to journalists at a conference at Ikeja on 30th September 2018: Sanwo-Olu was “once arrested and detained for allegedly spending fake dollars in a nightclub in the United States” and he was also “a patient at Gbagada General Hospital where he had gone for rehabilitation.” Many of us concluded that this was it for Ambode and Sanwo-Olu, but what did we rather see? Ambode swallowed his words and pride and worked for Sanwo-Olu’s election. Really? Sanwo-Olu polled 262 votes to Jimi Agbaje’s 62 in his (Ambode’s) ward at Epe.

What then is the matter with our sons that they cannot call themselves to order and allow us to live our lives? Why do they “cry havoc and let loose the dogs of war?” What is the matter that cannot be talked over, and what is the wound that cannot be healed? For all the celebratory words we’ve heard from Wike and Amaechi, they were merely talking about Rivers State. We challenge them to now talk to each other.