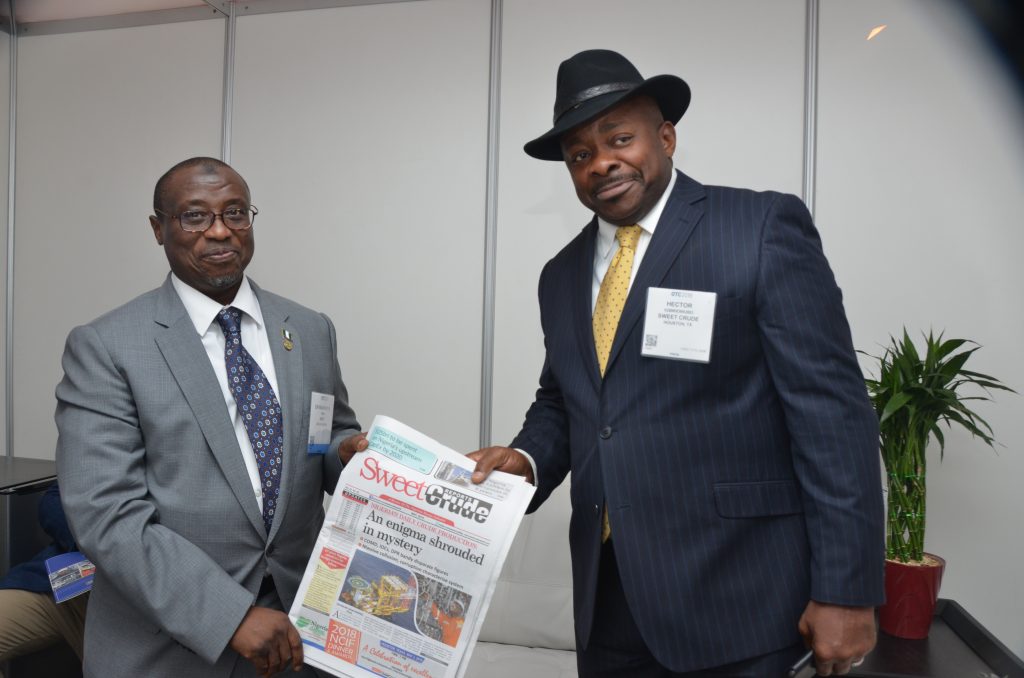 *Dr. Maikanti Baru, Group Managing Director of the NNPC receiving a copy of the May 2018 edition of SweetcrudeReports from Hector Igbikiowubo, the Editor-in-Chief of the newspaper at the NNPC stand in the NRG Park, venue of the 2018 Offshore Technology Conference taking place in Houston, Texas.

01 May 2018, Sweetcrude, Houston — The Nigerian National Petroleum Corporation (NNPC) through its upstream subsidiary, the Nigerian Petroleum Development Company (NPDC) has disclosed plans to acquire oil blocks in West Africa and globally. Group Managing Director of NNPC, Dr. Maikanti Baru, stated this at the opening of the Nigerian Pavilion at the ongoing Offshore Technology Conference (OTC) 2018 which opened Monday in Houston Texas, USA.
He said the NNPC has perfected strategies to becoming the energy company of the future by making inroads into new frontiers by acquiring oil blocks in the West Africa region and globally.

“We would push our flagship to be taking blocks in other climes and compete just as Integrated Data Services Limited (IDSL) has been able to do. 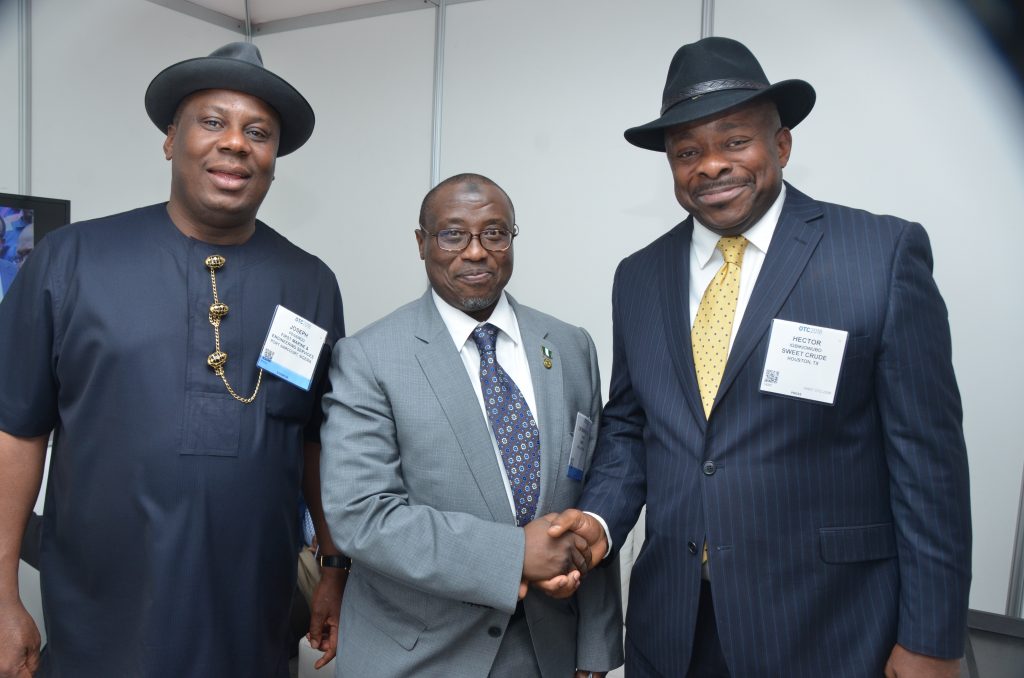 NNPC is also following what is obtainable the world over by transforming the Corporation from a National Oil Company, NOC, to an energy company of the future and it will also push out its services with time, first to the West African sub-region and of course globally.

He equally explained that Oilfield Services which started in 2009 is also a budding division that would eventually become a full-fledged company offering services to all other regions and parts of the industry working in all those areas that NNPC is not acting as a service company.

On the OTC which attained 50 years, Baru said indigenous companies in Nigeria have been able to grow capacity over the years as they now compete favourably with some of their counterparts in the various field of the oil and gas industry.

The NNPC boss tasked the service providers to go out and look for more partners and better technology for them to excel, especially in areas they consider difficult, adding that they should also emulate some the companies that are displaying their diversification by integrating so that the country could have more conglomerates.

He said the OTC has been concentrating its activities around Houston and that it will continue to serve as a focal point for bringing different people with different ideas and services together.

The NNPC boss said the exhibition today marks a great improvement not just in terms of quality but in the number of companies that are giving service in the Nigeria oil and gas industry.

Baru said he was particularly impressed comparing what the OTC was in the 90s to what he saw yesterday, stating that in the 90s, the attendance at OTC was more or less a jamboree. But today, progress has been made.

“When we started pushing for local content in the early 90s, the drive was to see Nigerians retaining value in-country. I am happy to see today that there are not only seasoned opportunities in terms of simply giving services and commission agents to actually participating in works. And works that are high-tech.

Some of the exhibitions I have seen gladdens my heart because I have seen service companies that have ventured out of Nigeria, offering services to other petroleum industry worldwide.

In the true sense of it, we have Nigerian companies that are manufacturing high-tech equipment including pigs used for the inspection of pipelines being exported to far-away Norway. We also have Nigerian companies working in the most difficult terrain in deepwater ranging over 1000 meters and yet Nigerian pigs have found home and usage comfortably with good results in those territories,” he said.