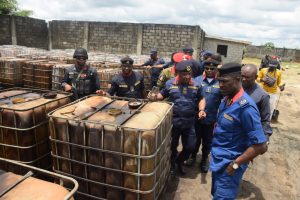 *NSCDC officials with some of the recovered stolen oil

NSCDC Commandant in Rivers State, Michael Besong Ogar, said out of the 16 suspects arrested for their involvement in illegal oil dealings, eight of them were arrested by the Rivers State Command’s Anti-vandal land patrol at different locations across the State.
He assured that there was no going back on the arrests and prosecution of pipeline vandals, oil thieves and their sponsors, as the Command under his watch would continue to pursue the illegal oil bunkerers from their hideouts, dismantle their dumps and prosecute them.
He said: “Following credible intelligence, these suspects: Abubakar Babangida Jinadu (M) 33 years , Mohammed Ibrahim Kabir (M) 30 years and Gombejo Musa (M) 45 years, were intercepted and arrested along Eliozu-Air Force Road in Obio/Akpor LGA while conveying a Howo 911 truck with number plate Abuja ABC764XD laden with unquantified litres of illegally refined Automotive Gas Oil, AGO, concealed in cellophane and packed in sack bags.
“In addition, one Mathew Ani (M) 27 years was arrested along Azikiwe Road in Port Harcourt. He was intercepted in an ash Colour Volkswagen Car with registration number Rivers BNY471NL laden with three drums (750litres) of illegally refined AGO.
“Consequently, during our routine patrol the antivandal land operatives impounded a bus with plate number Lagos BDG903XZ laden with illegaly refined AGO concealed in cellophane bags at Nonwa axis of the East/West Road in Tai LGA. However, the suspects, upon sighting our men, abandoned the vehicle and took to their heels.
“The Command’s antivandal land patrol team at Ogbogoro Community in Obio/Akpor LGA also impounded two cars with number plates  Lagos APP382FB and Abia ABA56HA laden with about five drums of illegally refined AGO.”
The Rivers NSCDC boss further confirmed receiving from the Nigerian Navy Ship Pathfinder, another eight suspects arrested for illegal dealings in petroleum products while in conveyance of  three wooden boats laden with unquantified litres of AGO and a fibre boat laden with 19 drums of AGO.
He noted that the official hand over of the suspects was meant to enhance further investigation and prosecution by the Command in tandem with the NSCDC Act 2003 as amended in 2007.