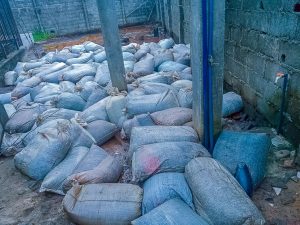 Port Harcourt — The Nigerian Security and Civil Defence Corps says it has uncovered a residential building used by illegal oil bunkerers as a dump site for the storage of illegally refined Automotive Gasoline Oil, near Ignatius Ajuru University of Education in Rumuolumeni, Obio/Akpor Rivers State.

Commandant of NSCDC in Rivers State, Abu Tambuwal, said the feat was achieved due to sustained intelligence, which led to an ambush for over three days, when the said building was being used as a loading point of illegally refined AGO.

Tambuwal, speaking through the Command’s Head of Anti-vandal Squad, Joachin Okafor, said the surveillance team of the Anti-vandal Squad swung into action to effect the arrest of those carrying out the act which amounts to economic sabotage.

“Based on sustained intelligence, the surveillance team of the Anti-vandal Squad laid ambush for three days to monitor the events around the area;

“In consonance with the provisions of Section 3 (l) (ii) of the NSCDC Act 2003 as amended 2007; I eventually ordered my men to advance into the compound and we later confirmed that the ash colour bungalow building located at Iwofe Rumuolumeni, is being used as a loading point of illegally refined Automotive Gas Oil stored in cellophane bags.

“In addition, we saw a black Lexus 330 saloon car with number plate Bayelsa GBB52EA, a Toyota Avalon gold colour car with registration number Rivers FH730PHC laden with some cellophane bags of illegally refined AGO, a boat engine and several bags of AGO stored in cellophane bags scattered within the premises.”

The NSCDC boss in Rivers State reiterated that the Corps will not relent in the fight against oil theft, illegal oil bunkering and all acts of economic sabotage in the State, while assuring of detailed investigation into the matter and possible prosecution.

“If this unscrupulous act was not uncovered it could have led into fire outbreak and the continuous operation of illegal refineries in the area would definitely lead to environmental degradation and pollution of the environment which is hazardous to the health of the good people of Rivers State.

“The Command will carry out detailed investigation as no one highly placed or not would be exonerated if found culpable especially as the perpetrators are currently at large. The residential building has been sealed and our operatives have cordon off the area.

“We have also identified a local jetty nearby the scene of the crime where illegally refined AGO are being loaded for onward transmission to would be buyers.

“The Command will approach the Court with the requisite jurisdiction to make necessary application for the forfeiture of the petroleum products, modes of conveyance and the residential apartment as this unscrupulous act contravenes the provisions of the Miscellaneous Offences Act 2004, laws of the federation.”