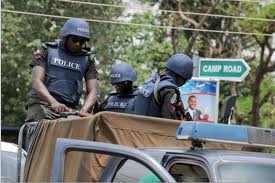 21 November 2017, Sweetcrude, Port Harcourt – The Movement for the Survival of the Ogoni People, MOSOP, has alleged Police killing of three youths of Luebe Community in Ogoniland for daring to intercept the movement of stolen petroleum products through the area.

MOSOP alleged that the youths were shot dead by the Police when they attempted to stop them (Police) from escorting the illegally acquired petroleum products through their community en-route Ndoki in Oyigbo Local Government Area of Rivers State.

Publicity Secretary of MOSOP, Mr. Fegalo Nsuke, regretted that the economic crime of crude oil theft, pipeline vandalism, illegally refining of petroleum products and bunkering was enjoying the protection of the Nigerian Police.

“Our checks reveal that the youths have attempted to stop the police from escorting illegally-mined petroleum products through their community en-route Ndoki in Oyigbo local government area of Rivers State.

“The Luebe killings is very regrettable not only because the youths have risen against the pipeline vandalism masterminded and prosecuted by men of the Nigerian police, they have also shown that the crime for which the government and Shell has accused the Ogoni community is a crime by a criminal gang that is enjoying the protection of the Nigerian Police.

“The Ogoni people are disheartened that the killing of our people by state security and the policies of government is dangerously and increasingly pointing to a deliberate state-backed genocide against the our people.”

Fegalo Nsuke called on the Federal Government to properly investigate and prosecute any erring police officer involved in the Luebe killings, and demanded an end to what he described as mindless and seemingly deliberate killing of Ogoni people by Nigerian security forces.