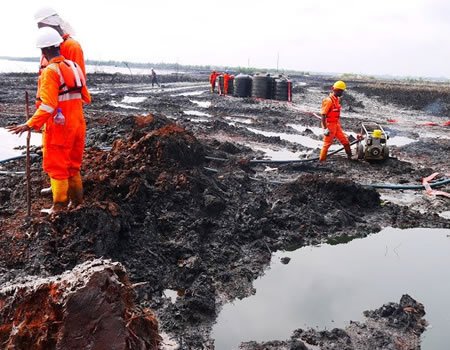 10 June 2018, Sweetcrude, Port Harcourt — The Movement for the Survival of Ogoni People, MOSOP, together with a Coalition of Civil Society Organisations have faulted the comment made by President Muhammadu Buhari on the satisfactory level oil-impacted of oil-impacted sites in Ogoniland.

Recall that President Buhari had in his Democracy Day speech last week, announced that the cleanup and remediation of polluted parts of the Niger Delta environment which commenced with the flag-off of Ogoni cleanup on June 2nd, 2016 was “progressing satisfactorily.”

But MOSOP speaking at the quarterly engagement with communities to appraise the progress of the cleanup and emergency measure, organised by Civil Society Legislative Advocacy Centre, CISLAC, said there was nothing satisfactory about the cleanup exercise.

The spokesperson of MOSOP, Mr. Fegalo Nsuke, who vehemently disagreed with the President, said the people of Ogoni are still subjected to drinking polluted water, whereas UNEP had recommended provision of water as an emergency in its report.

“I totally disagree with the President because I don’t think that if the project is moving progressively that the Ogoni people will still be drinking polluted water.

“Ogoni people still live in a totally polluted environment and they are dying every day. It is so terrible that in a community like Bodo in Gokana LGA, at least ten people die every week. Does this amount to progressive or satisfactory work?”

For his part, the Conflict Advisor of CISLAC, Mr. Salaudeen Musa, said although there have been some challenges since the launch of the cleanup project, there has not been anything significant as touching the lives of the people.

Musa said the meeting tend to appraise the entire cleanup process, do some analysis of steps taken and what can be done differently, as well as the role of the civil society in the cleanup of Ogoniland.

He said the President was being misinformed by his handlers who have refused to give him the true picture of the situation on the ground.

“We still know that a lot has been applied in the report; the emergency measures, the cleanup remediation, non of them have been done and to have said that cleanup was progressing satisfactory, for us is something that came very surprisingly.

“Tendencies are there that the Advisers of the President are not advising him properly or are not giving him the true picture of the programme.

“Tendencies are there that they are fielding the president very wrong information, they may be trying to politicising the process, elections is by the corner, so as to win themselves into the hearts of the people to get votes.

“This programme is an opportunity for us to set the record straight and let the President know that the communities are suffering. That there are a lot of issues that are not on the ground and that he needs to urgently, personally attend to the issue of the cleanup exercise.”