on: November 23, 2020In: Community Development, featured 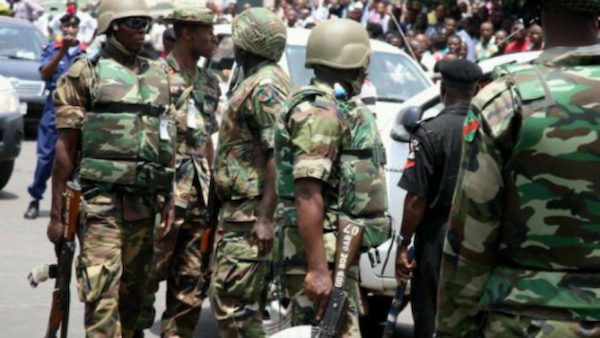 Port Harcourt — The Nigerian Army has launched Operation Crocodile Smile VI Exercise in Bayelsa State, to curb security threats such as cultism, illegal oil bunkering, pipeline vandalism and other crimes in the state.

The event took place at the Army Super Camp, Ema-Okenema in the Ogbia Local Government Area of the state.

Irefin pledged the Nigerian Army readiness to cooperate with other security agencies and uphold professional ethics as well as standard rules of engagement for internal security operations.

He said the exercise would end on December 31st 2020, and “it is targeted at curtailing prevailing security threats such as cultism, illegal oil bunkering, pipeline vandalism and other crimes in the state.”

Also, the Governor of Bayelsa State, Douye Diri, commended the Nigerian Army and other security agencies for the role its men and officers played to prevent the breakdown of law and order in the state.

Diri, represented by his Deputy, Lawrence Ewhrudjakpo, said but for the gallantry and professionalism of the army, Bayelsa would have been thrown into chaos as a result of the Supreme Court ruling on February 13.

He also expressed gratitude to security agencies for being alive to their responsibilities during the #EndSARS protests to forestall carnage in the state.

“Your singular show of professionalism was able to nip in the bud the rascality and criminal activities that tried to rear up their ugly heads as a result of the Supreme Court decision that restored our stolen mandate on the 13th of February 2020.

“If not of your effort, we believe that the carnage that took take place in the state would have gone beyond what we saw. So, we want to thank the Nigerian Army and other security agencies for the roles you all played in the events that led to our successful swearing-in on the 14th of February.”