22 November 2015 – To understand what the oil price crash will mean for global crude supplies next year, look no further than the two nations that added more barrels to world markets in 2015 than anyone else.

The U.S. and Iraq, whose extra crude this year equates to about 80 percent of the global surplus, will fail to boost output in 2016, according to the world’s biggest forecasters. While the U.S. curtailment is mainly because prices are too low to spur fresh supply, the Middle East country’s ability to boost output is also being crimped by a need to fund its battle with Islamic State.

Slowing output in the the two fastest-growing producers signals the global glut, which has depressed oil prices to near $40 a barrel, may begin to dissipate next year, according to Barclays Plc. While that would start to fulfill Saudi Arabia’s plan to re-balance world crude markets, Iraq’s struggles show that producers in OPEC are also suffering as that strategy takes effect.

“The U.S. and Iraq have been two of the biggest contributors to the global oil surplus and when we look at 2016, production in both will be challenged,” Torbjoern Kjus, an analyst at DNB ASA in Oslo, said by e-mail. “Accelerating decline rates and reduced investment will lead to falling U.S. output, while Iraq is unlikely to see much growth from further levels.”

The two nations are now pumping the equivalent of 4.88 billion barrels a year, an increase of 1.77 billion barrels, or almost 60 percent, compared with their output rates at the start of 2012. To put that in context, oil inventories in Organization for Economic Co-operation and Development nations expanded by 314 million barrels, or 12 percent, in the corresponding period.

U.S. shale production, which has driven a six-year boom in the nation’s oil output, will decline by 600,000 barrels a day next year, according to the International Energy Agency. Total U.S. oil supply is set to surge by 830,000 barrels a day this year, powered by shale formations in Texas and North Dakota. Oil traded at $40.39 a barrel in New York at 9:49 a.m. New York time.

Iraqi production “is likely to remain broadly flat” next year as the OPEC member “is struggling with the stress of $50-a-barrel oil and a costly battle” with Islamic State militants, the IEA said in a report on Nov. 13. Baghdad is also straining to reimburse international oil companies for investments in southern fields. BP Plc cut this year’s operations budget by 60 percent to $1 billion. As oil prices halved, Iraq has had to pay twice the amount of crude to foreign firms who receive per-barrel fees in the form of cargoes. 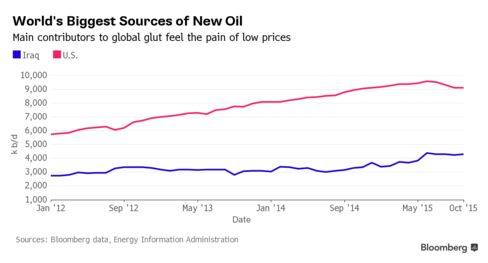 In the north, the semi-autonomous Kurdish region is struggling to pay partners amid a budget dispute with Baghdad. DNO ASA, the Norwegian operator of the Tawke field, and Gulf Keystone, which operates Shaikan, have said their plans are on hold until they receive overdue payments for output from the government. The Kurdistan Regional Government began making regular monthly transfers to companies in September, although DNO says it’s only receiving half of what it is owed for monthly exports and nothing towards reducing accumulated arrears.

With output gains in jeopardy, “there are signs that the supply glut is easing,” said Kevin Norrish, managing director for commodities research at Barclays in London.

“U.S. shale oil growth measured over last year’s levels is now coming to an end at last and given the infrastructure constraints in Iraq, plus an end to the upward trend in Saudi output it seems the phase of steadily rising OPEC production may be pausing for now as well,” he said. “The long, slow process of re-balancing the oil market continues.”