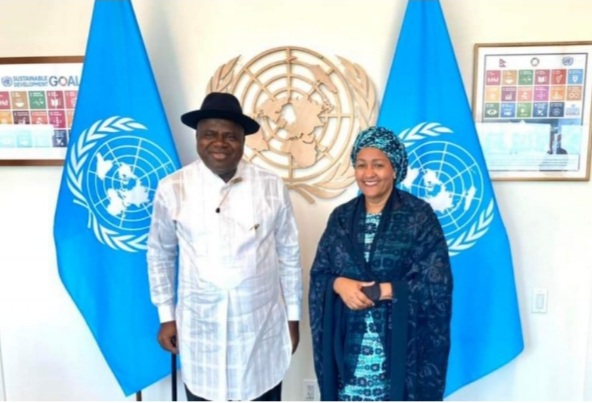 The call is not unconnected to the ongoing oil spills from a well head in Cawthorne Channel operated by Eroton Exploration and Production Company.

Diri in a statement by his Director, New Media, Dr Kola Oredipe, lamented that Bayelsa State was the worst hit by incidents of oil spills leaving behind attendant devastated ecology and health issues.

He emphasised the ongoing clean-up in Ogoniland which is supervised by United Nations Environment Programme, should be extended to the entire Niger Delta, especially Bayelsa State.

“You are very familiar with our stories and the Niger Delta environment. We must commend what you started in Ogoni as then Minister of Environment.

” Our land and rivers are polluted. The remediation of the region must be total. Bayelsa State is worst affected.”

The governor also disclosed that his administration remains committed to the attainment of the United Nations’ Sustainable Development Goals, to enhance the living conditions of the people of the state.

He said he was building critical infrastructure to open up Bayelsa State for more investments in different sectors, adding that he has offered to host the meeting of the Gulf of Guinea in Yenagoa because of the importance attached to the maritime domain.

Responding, the Deputy Secretary-General of the United Nations, Dr Amina Mohammed, admitted that the UN is disturbed at the level of environmental pollution in the oil-rich Niger Delta, describing the situation as a “complete disaster.”

“It is not just about Ogoniland but the remediation should be for all oil-producing areas. The means of livelihood of the people, fishing and farming are greatly affected. The oil pollution is a complex thing, and it is a complete disaster which requires urgent intervention.”