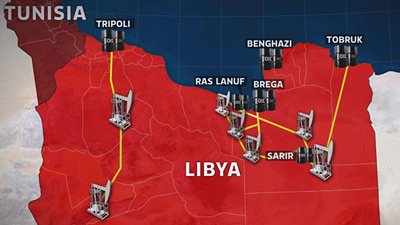 U.S. oil futures fell as much as 3% on Thursday after trading in a tight range this week. The Messla oil field and Sarir refinery in eastern Libya resumed production after a technical problem forced a shutdown. Meanwhile, rising global coronavirus cases and reports of layoffs at companies from Wells Fargo & Co. to Walgreens Boots Alliance Inc. are dampening the potential of a demand recovery later this year.

“The global market is going to have a difficult time absorbing these additional Libyan barrels,” said John Kilduff, a partner at Again Capital LLC, a New York hedge fund focused on energy. At the same time, there is going to be “tens of thousands of layoffs of folks who are going to be out of work and not driving. All of a sudden there’s a real focus on the potential for the bottom to drop out for oil demand here.”

The U.S. benchmark crude rebounded from a plunge below zero in April, but the recovery has been limited with futures trapped near $40-a-barrel in the wake of near-record high stockpiles and rising virus cases across America. In the U.S., California and Texas recorded some of their biggest daily increases in cases and deaths this week. Goldman Sachs Group Inc. recommended buying Brent futures over West Texas Intermediate as American inventories grow.

Further complicating market dynamics, tankers that had been storing much of the world’s oil as demand cratered due to the pandemic are beginning to offload cargoes. In key locations outside Asia, floating inventories have halved to about 35 million barrels since peaking in May, according to Vortexa Ltd., an analytics firm.