Oil set for longest run of weekly gains since 2017

London — Crude is set for the longest weekly winning streak since November 2017 amid concerns over supply shortfalls from countries like Venezuela and optimism over U.S.-China trade talks.

Futures in New York rose as much as 0.9 percent Friday, leading to a 4 percent rally for the week. OPEC’s production dropped for a fourth straight month in March while Venezuela’s oil output has plunged by half amid power failures, according to people familiar with the matter. As for the discussions between the U.S. and China, China’s Vice Premier Liu He said the two sides “reached new consensus on such important issues as the text” of a trade agreement, Xinhua News Agency reported.

Crude rose along with U.S. equities after a report showed domestic hiring rebounded more than forecast in March.

The market is focused on “OPEC confirmation that they will continue to be disciplined. We are looking at potentially less output from shale, the mess in Venezuela and now there is a risk in Libya,” said Bart Melek, head commodity strategist at Toronto Dominion Bank. “We’ve seen people get a lot more happy about going long in this environment.” 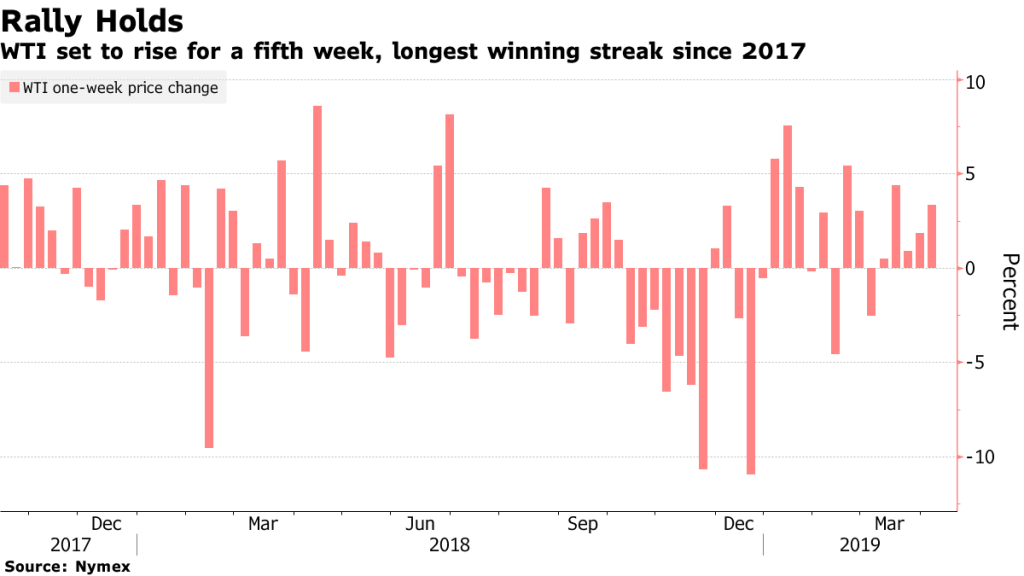 The U.S. benchmark crude climbed more than 30 percent during the first three months of the year as the Organization of Petroleum Exporting Countries and its allies trimmed production as part of an agreement to help balance global oil markets. Escalating tensions in Libya and Venezuela are also providing support for crude.

West Texas Intermediate crude for May delivery advanced 42 cents to $62.52 a barrel at 9:46 a.m. on the New York Mercantile Exchange. Prices have rallied for a fifth straight week.

Brent for June settlement added 24 cents to $69.64 a barrel on the London-based ICE Futures Europe exchange, after briefly topping $70 for the first time since November in the previous session. The global benchmark crude was at a premium of $7.04 to WTI for the same month.

Prices have also been lifted this week by signs that the U.S. and China are on track to resolve the ongoing trade dispute that has threatened oil demand. U.S. President Donald Trump said while any trade deal with China was probably still weeks away, both sides were making progress on an accord that could be “very monumental.”