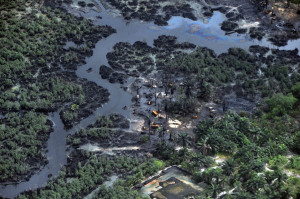 Port Harcourt — The Federal Government has been charged to strengthened relevant institutions in the country, to hold oil firms operating in the Niger Delta accountable for environmental pollution in the region.

The Environmental Rights Action/Friends of the Earth Nigeria, said pollution by oil firms will reduced when regulatory agencies are strengthened to be independent from multinational companies, civil society organisations, professional bodies, and even communities.

Williams who gave the timeline of the issues, said that the suit was filed since 2008 against Shell by Milieudefensie, together with the four farmers from Rivers, Akwa-Ibom and Bayelsa States, due to oil spill by SPDC which affected their farm investments in different locations.

He added that the suit was taken to Netherlands because Royal Dutch Shell, the parent company of SPDC, is partly owned by Dutch government, hence, should be held accountable for environmental pollution in Nigeria.

According to him, “We are emphasising that home countries of oil companies should be held responsible for any havoc caused in their operating countries.

“Federal Government should strengthen her institutions to be independent from oil companies. It is not just setting up the institutions, but making them effective.

“Those institutions must be independent of the oil companies. The regulatory agencies are so dependent on the oil firms that’s why they are ineffective. Nigeria needs to make the institutions in charge of environment to be strong, then we will get it right.

“The Government is suppose to regulate and determine the culpability of a company when there is environmental destruction. We call on federal government to do more in effecting and executing its mandate.

“Government should execute the law after the judiciary has done its part, so that these multinational companies will obey the laws as they obey the laws of their countries.

ERA also tasked the Shell Petroleum Development Company, SPDC, to return to Ogoni and other communities they have impacted with oil pollution, and decommissioned their facilities to end further pollution in the areas.

Williams alleged that Shell was out to disobey institutions in the country, adding that when the government takes proactive measures, oil companies would be cautious not to pollute their host communities.

“Shell claims to have left most of these Niger Delta communities like Ogoni. They left without decommissioning their facility. They left with abandonments.

“The plaintiffs want SPDC to come back to their properties, cleanup the environment, remediate it and decommission their facilities, so they can go back to their farming business, as their livelihood sustainance as before.

“Shell should also compensate the farmers adequately because they are supposed to be paid for their losses both physiological, emotional, physical and financial.”

ERA expressed optimism that the court in Netherlands will give the four Nigerian farmers justice for the damage done to their land by Shell, adding that the farmers have already won two critical grounds on the judgement.