Oil stable below $100/b as market balances Chinese data 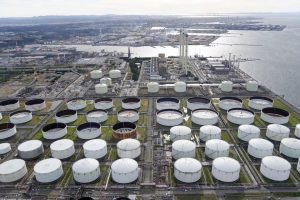 *An aerial view shows an oil factory of Idemitsu Kosan Co. in Ichihara, east of Tokyo, Japan November 12, 2021, in this photo taken by Kyodo.

Both contracts dropped by over $1/bbl earlier in the session as Chinese health officials on the weekend reiterated their commitment to a stringent COVID containment approach, dashing hopes of a rebound in oil demand from the world’s top crude importer.

Brent and WTI rose last week, climbing 2.9% and 5.4%, respectively, on speculation of a possible end to COVID-19 lockdowns despite the lack of any announced changes.

The U.S. dollar sank on Monday against the euro and sterling was supported by a risk on sentiment and a rally in European stock markets.

While China’s imports and exports unexpectedly contracted in October, its crude oil imports rebounded to the highest level since May.

Oil prices have been underpinned by expectations of tighter supplies as the European Union’s embargo on Russia’s seaborne crude exports will start on Dec. 5 even though refineries worldwide are ramping up output.

U.S. oil refiners this quarter will run their plants at breakneck rates, near or above 90% of capacity. China’s largest private refiner Zhejiang Petroleum and Chemical Co (ZPC) is raising diesel output.

Kuwait Integrated Petroleum Industries Co (KIPIC) said on Sunday the first phase of the Al-Zour refinery has started commercial operations, according to a state news agency.