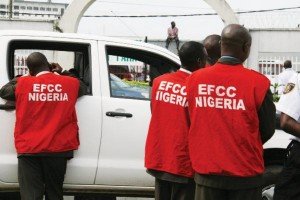 Port Harcourt — A vessel, MT Preye I and her crew of 11 suspected oil thieves, have been handed over by the Nigerian Navy to the Economic and Financial Crimes Commission, EFCC, for investigation and possible prosecution.

The vessel and the suspects were arrested by men of the Nigerian Navy Forward Operating Base, Bonny in Rivers State.

Speaking, the Commanding Officer of the FOB, Commodore K. O Oguntuga, said the vessel, suspected to be carrying unspecified quantity of stolen crude oil and her crew were arrested at about 1815 hours on January 10, 2020.

The vessel and her crew were received on behalf of the EFCC by Deputy Detective Superintendent, Akinsola Babajide of the Port Harcourt Zonal Office, who promised diligent investigation of the alleged crime.