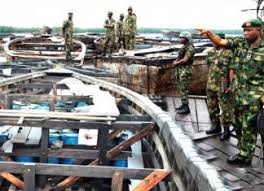 Representative of Sector III, Operation Delta safe, Colonel N.C.E Ejike, who led the handing over, said the suspects and the vessel were arrested by officers of 29 Battalion, Nigeria Army, deployed for anti-bunkering operations at Bile, Degema Local Government Area of Rivers State.

Ejike, explained that the suspects were nabbed while siphoning petroleum products suspected to be crude oil from a pipeline.

Stanley promised that the EFCC will utilize the power vested in it to ensure that justice is served.

He further assured that the suspects will be charged to court as soon as investigation was concluded.