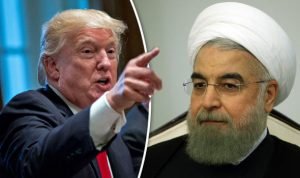 London — Oil prices jumped by about 1% on Monday, pushing Brent above $70 a barrel, as rhetoric from the United States, Iran and Iraq fanned tensions in the Middle East after a U.S. air strike killed a top Iranian military commander.

The gains extended Friday’s more than 3% advance after a U.S. air strike in Iraq killed Iranian military commander Qassem Soleimani, heightening concerns about an escalation in conflict in the Middle East and the possible impact on oil supplies.

U.S. President Donald Trump on Sunday threatened to impose sanctions on Iraq, the second-largest producer in the Organization of the Petroleum Exporting Countries (OPEC), if U.S. troops were forced to withdraw from the country.

Baghdad earlier called on U.S. and other foreign troops to leave Iraq.

Trump also said that the United States would retaliate against Iran if Tehran were to strike back after the killing.

“The situation brings lots of uncertainty and geopolitical tea-leaf reading on reactions. While the closure of the Strait of Hormuz remains a very unlikely event, the deterioration in Iraq bears supply risks,” said Norbert Rucker, head of economics at Swiss bank Julius Baer.

“Geopolitics tend to be a temporary force on oil markets and we believe this time is no different. We raise our near-term forecast to $65 per barrel and maintain a neutral view”.

The Economist Intelligence Unit raised its first-quarter projection for Brent by $5 to $70 a barrel, assessing that Iran is likely to want to avoid open conflict.

“We maintain our forecast that the two countries are likely to avoid outright war. Iran is not in a position financially, after more than a year of crippling U.S. sanctions, to finance a lopsided war with the U.S.,” EIU global economist Cailin Birch wrote in a note.

In the United States, crude stocks fell by their most since June as exports exceeded 4 million barrels per day for the first time in history, the Energy Information Administration said on Friday.