on: October 12, 2019In: Community Development, featured 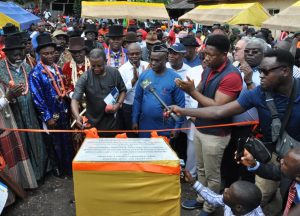 Port Harcourt — The Nigeria Government has expressed sadness over the high level of underdevelopment in OML 25 host communities of Offoin-Ama, Belema and Ngeje, despite producing 45,000 bpd and over 50 million scf per day of gas for over 40-years.

To this end, the Federal Government has offered an open apology to the members of OML 25 host communities, in Akuku-Toru Local Government Area of Rivers State, assuring that it will make the development of the communities a priority.

Special Adviser to President Muhammadu Buhari on Niger Delta, Sen. Ita Enang, at the official reopening of OML 25 said it was sad that the communities which produces huge revenue for the country was demanding for basic amenities like potable water, schools and hospitals in 2019, after 40years of playing host to a multi-billion dollars investment.

Enang assured that the President Muhammadu Buhari-led administration is committed to the development of the region, hence, the Federal Government would ensure that the National Assembly redirects the 2020 budget for the Niger Delta to meet the needs of oil producing communities.

He also assured that he will work with the Ministry of Niger Delta Affairs, the Niger Delta Development Commission and the Presidential Amnesty Programme, to ensure that oil producing communities adequately benefit from the oil being extracted from their communities.

“I am saddened that for the past 40 years of Shell’s operation here there is no school, portable drinking water nor hospital; I will take your demands to the President and he will not just provide your needs, but will also provide all necessary facilities for all oil bearing communities in Nigeria.

“On behalf of the country, we apologise to you, this situation under President Buhari will change for the better for us all.

“I personally scooped the water you drink here with my hands and it has oil in it, i can still feel the oil in my palms till now.

“Communities hosting a facility which generates over $2million per day which amounts to over N700m daily for the country should not be asking for a primary school and health centre in 2019 after all these years is saddening.

“We will ensure that the National Assembly redirects our 2020 budget towards this, because we are going to take it up and capture these issues,” Enang said.

Also, the Group Managing Director of the Nigerian National Petroleum Corporation, Melee Kyari, said NNPC would partner with SPDC and Belemaoil Producing Limited, to address the needs of the host communities.

Kyari represented by the Group General Manager, National Petroleum Investment Management Services, Musa Lawan, said that the reopening signifies more revenue for the country and development for the host communities.

“I have personally observed the lack of portable drinking water and school in the community, so in partnership with Shell and Belema oil beginning from 2020, we will have a programme to atleast solve these two issues and we’ll continue to address the demands of the people as they arise.

“When there was crisis at this facility, the entire nation lost, but today we can say the nation will start gaining because peace had returned here as the communities are willing to allow the differences be resolved on the table and for oil to start flowing again.

“The country will start earning revenue again, and the social responsibility of all the joint operators not just NNPC would be met.”

For his part, the Amayanabo of Opu-Kula, HRM King Bourdillon Ekine, officially removed the traditional injunctions placed on the Belema flow station and gas plant, to paved the way for resumption of operations in the facility.

“We are confident that the commitment of the Federal government, NNPC, SPDC and Belemaoil in orchestrating this peace deal will be beneficial to all concerned and lead to the economic growth of Nigeria’s economy and the overall development of the host communities.”