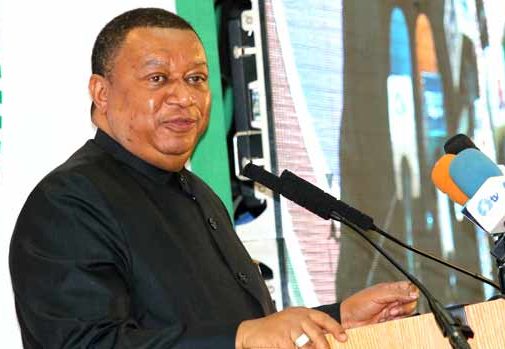 20 February 2018, Sweetcrude, Abuja – The Secretary-General of the Organisation of Petroleum Exporting Countries (OPEC), Mr. Mohammed Barkindo, has declared that the organisation’s decision to cooperate with non-members in cutting crude production costs was transformative.

Barkindo said this in Abuja at the opening ceremony of the maiden Nigeria International Petroleum Summit (NIPS).

OPEC had made a decision for member countries to cut production when oil prices were low, to force a rise in the price of crude.

He said OPEC had embarked on one of the “most innovative enterprises ever known in the history of oil” – the declaration of cooperation.

Barkindo said this innovation was a response to an unprecedented market turbulence which had a devastating effect not only in the industry but in the economies of OPEC member countries.

He said, “Thankfully, a breakthrough came in the form of the declaration of cooperation. This was the culmination of an extensive consultation undertaken throughout 2016 with the aim of gaining consensus about the strategic urgency of bringing this market back to balance in a collective manner.

“If one word was to be used to describe the impact of the declaration, it would be ‘transformative’, a new player has emerged on the global oil scene, the OPEC and non-OPEC strategic partnership.

“Many didn’t think it would get off the ground; however, we have registered conformity in 2017 of 107 percent across all the participating countries.

“I would like to use this platform to also announce our January figures of 133 percent that would be released in a couple of hours in the OPEC secretariat,” Barkindo said.

According to him, Nigeria’s President Muhammadu Buhari is a credit in securing the adoption of the historic declaration of cooperation.

“On behalf of the entire OPEC family, I will like to express our deep appreciation for his open and cooperative stance. His willingness to use his good office, international respect and admiration to intervene at the heads of states level and his flexibility in reaching a consensus position behind closed doors.

“Nigeria is consistently regarded as one of the respected members of OPEC, particularly in the realm of consensus building,” he said.

President Muhammadu Buhari, who was represented by the Secretary of the Government of the Federation, Boss Mustapha launched the maiden edition of the Nigeria International Petroleum Summit, NIPS, in Abuja on Monday.

In his welcome address, the Minister of State for Petroleum Resources, Dr. Emmanuel Ibe Kachikwu, said to drive investment in the sector, the cost of producing crude was key.

“The challenge for oil companies has changed. Oil has got to provide the resources to power this country; jobs for our people and the operational environment that is transparent enough for others to take Nigeria seriously.”

“My target is that over the next 10 years, Nigeria would produce an FPSO; Nigeria would become self-sufficient in its own power provision and Nigeria would gravitate from crude oil, as it were, to very refined, clean provision of fossils.”

He added that in 10 years, he expected that Nigerian companies, entities, and shareholders, would begin to move from 10 percent today, to between 40 and 50 percent of local investments.

He said opportunities abound in the sector after the launch of the 7Big wins two years ago, as the ministry had been able to change the funding capacity for the upstream.

“That is very key and that is coming from a country where investments had runaway for nearly seven to 10 years,” he said.

On Niger Delta militancy, he said the ministry had been able to find a way of engagement that respects the communities, focus on their needs and take them seriously.

“Not just as agitators, but indeed, as partners in the exploration of crude oil among others. A lot of engagements to take place, a lot more work to be done, and I have given as much time.

“If we continue this and can focus on host communities, we can find the peace that is essential ultimately to be able to operate in this country without difficulties.”

He said for the first time, issues of refineries have been addressed by the ministry, creating a model where target investments would go into the dilapidated refineries.

“Some of those would be announced over the next one month. We are still targeting to be able to get these refineries up and running from about 14 percent utilisation capacity today, to about 90 to 95 percent over the next 18 to 20 months.

“If we do that, hopefully, we would begin to move drastically to self-sufficiency in the production of refined petroleum products.

“A lot has happened over the last two years, in the legislative and policy area. We started the early renewal of leases way before time. We are moving on it as rapidly as we can. We are looking at potentially going into marginal field releases. So everything that needs to be tackled has been done,” he said.

Kachikwu acknowledged that there would be hitches in the logistics and preparation of the NIPS but lapses would be worked on overtime and Nigeria could become the destination in Africa in terms of tourism, employment.

Speaking at the event, the Group Managing Director of the Nigerian National Petroleum Corporation (NNPC), Dr. Maikanti Baru, urged African countries to collaborate and increase trade with one another.

“I want to say that it is high time that African countries collaborate and trade among one another not only in terms of oil and gas but other key sectors.

“One of the key takeaways from an event as this is the networking opportunities and the strategic partnerships we make to better not just our industry but also our respective economies. No one will do it for us, the onus lies on us to do it for ourselves,” Baru said.

According to him, the summit’s action points will be developed and crystallised into a veritable roadmap for the future of the industry.

“As I scanned through the list of invited speakers and panelists, I am convinced we will be able to frame new strategies and come up with practical solutions for effectively developing Africa’s hydrocarbon resources.”

The inaugural NIPS is designed to be the African version of the annual Offshore Technology Conference (OTC) where breakthrough technologies in oil and gas are unveiled.

Baru said the event is “long overdue.” He expressed confidence in its potentials.

“I have full confidence that the discussions and interests alike will steer up strategies and actionable item that will transform into a veritable roadmap for our industry and our future,” he said.

According to the Permanent Secretary of the Ministry of Petroleum Resources, Mrs. Folasade Esan, NIPS represents “Nigeria’s contribution to the quest for a sustainable platform for global industry players to come to Africa in the interest of the oil industry.”

“It is designed to be Africa’s largest and most important industry platform and linkage to the world where engineering and technological breakthroughs will meet other developmental and economic diversification initiatives,” she said.

“This international petroleum summit is significant for several reasons as it has the full backing of the government of Nigeria and it represents our contribution to the quest for a sustainable platform for global industry players to come to Africa in the interest of the oil industry.

“Nigeria is open to private sector investments in the downstream sector and is pursuing vigorously the programme for the rehabilitation of existing refineries for us to enhance capacity to supply locally refined products to Nigeria and West Africa. This is a very key component of the national petroleum industry roadmap and the 2017 – 2020 Economic Recovery and Growth Plan,” the president said in his speech read by the official.

The NIPS, a five-day event, has the theme: ”Leading Africa’s response to global oil and gas challenges”.

The session also had in attendance the United States Ambassador to Nigeria, Mr. Stuart Symington; Minister of Petroleum of Chad, Mr. Bechir Madet; and the Secretary-General of the International Energy Forum (IEF), Dr. Sun Xiansheng, among others.