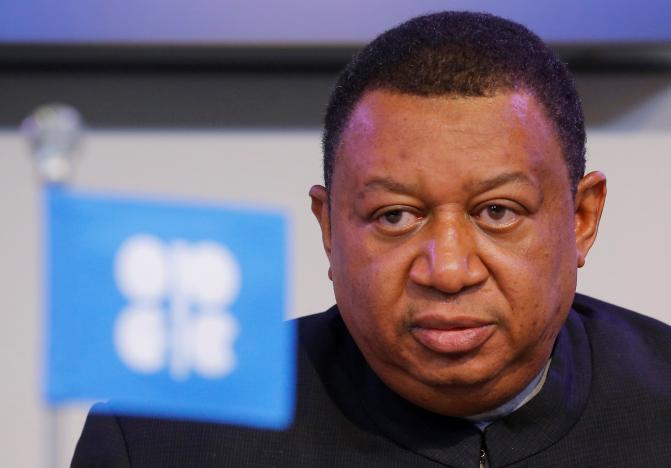 *OPEC Secretary General Mohammad Barkindo listens during a news conference after a meeting of the Organization of the Petroleum Exporting Countries (OPEC) in Vienna, Austria. REUTERS/Heinz-Peter Bader/File Photo.

10 June 2018, Sweetcrude, Lagos — The Organisation of the Petroleum Exporting Countries, OPEC, has declined comments over how it intends to defend its member country, Iran against the recent sanction by the President of the United States, Donald Trump.

Last week, SweetcrudeReports had sent an email to the Organisation through a medium on its official website, www.opec.org, asking to know its next move to help protect Iran’s crude oil export quota especially since the country is now experiencing shut-ins, however, OPEC has remained silent over the matter.

President Trump, last month, withdrew from a nuclear deal with Iran nearly three years after the Joint Comprehensive Plan of Action, JCPOA was signed by the Obama regime, re-imposing sanctions against the Muslim country.

In exiting the JCPOA, Trump broke from US allies in Europe, triggering a new crisis in the Gulf.

“At the heart of the Iran deal was a giant friction,” Trump said, that “a murderous regime” could not have a civilian nuclear programme without pursuing nuclear weapons.

The Iran deal was intended to slow and delay Iran’s efforts to build a nuclear weapon, lifting economic sanctions on Iran in exchange for a number of moves to shut down its uranium enrichment efforts and related programmes.

So far, Iran has asked OPEC for help against the sanctions, however, the group has ‘declined’ and is yet to make any official statement over how it will help its member.

The group’s next meeting holds in Vienna later this month, June 20-23.

“I would like to … seek OPEC’s support in accordance with Article 2 of the OPEC Statute, which emphasises safeguarding the interests of member countries individually and collectively,” Iranian Oil Minister Bijan Zanganeh said in a letter late last month.

Despite OPEC not commenting on the sanctions yet, the European Union has declared its stand when it announced a series of steps to counter U.S. sanctions over Iran’s nuclear ambitions, including enabling member states to make direct payments for oil to Iran’s central bank as well as the revival of the 1990s blocking statute that allows EU firms to ignore U.S. sanctions without fear of reprisal from Washington.

Iran’s OPEC governor Hossein Kazempour Ardebili had also asked the chairman of the OPEC board to include a sanctions debate in the agenda for the June 22 talks, according to a copy of Kazempour’s letter dated June 2.

Already, there are speculations OPEC may likely not accept to help, further creating uncertainty in the market, as countries are now beginning to slow on crude orders from the country.

However, as the geopolitical drama between not only Iran and the U.S., but between the U.S. and its EU allies unfolds over Trump’s decision, Iran has vowed that U.S. sanctions will not affect its oil exports.

“Tehran’s oil exports to remain unchanged if the Iran nuclear deal is salvaged by the EU following the US withdrawal from the multinational accord,” Iranian Oil Minister Bijan Zangeneh told reporters after his meeting with EU Energy Chief Miguel Arias Canete in Tehran last month.

According to Zangeneh, every new decision in OPEC needs unanimity, and added, “I believe that if the European Union helps us, the level of our oil exports will not change.”

Already, U.S has asked Saudi Arabia to pump more oil to cover a drop in Iranian exports, however, in a reply on Friday, Iran described the request as “crazy and astonishing”, adding that OPEC would not heed the appeal, setting the stage for a tough OPEC meeting this month.