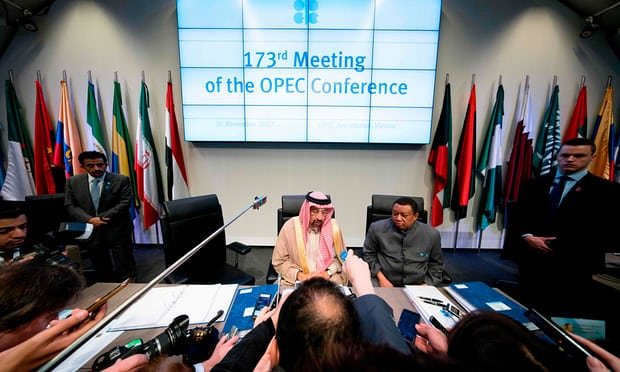 He spoke in Vienna, Austria, on Thursday at the 173rd meeting of the OPEC Conference, saying the decision had been unanimous, “a solid decision to extend deal through December 2018”.

Al-Falih said the six non-OPEC producers who are OPEC’s allies in the production cut, led by Russia, also endorsed the agreement.

The producers’ current deal, under which they are cutting supply by about 1.8 million barrels per day, bpd, in an effort to boost oil prices, expires in March.

Al-Falih, who is also Saudi Energy Minister, told reporters that OPEC and non-OPEC producers had agreed to extend the cuts by nine months until the end of 2018, as largely anticipated by the market.

OPEC also decided to cap the combined output of Nigeria and Libya at 2017 levels below 2.8 million bpd. Both countries have been exempt from cuts due to unrest and lower-than-normal production.

According to him, inventories would decline to the desired targets in the second half of 2018.

“We don’t expect supply surprises in 2018 as we saw in 2017”, he said, but added that supply from other regions remained unknown.

“The issue of Libya and Nigeria surprised market in 2017. There was constructive consultation with their leaders, they have an interest in market stability. We wish them the best.

“Both countries have told us their 2018 levels will not exceed what they achieved in 2017. So to the market we say there are no surprises expected from them,” Al-Falih also said.

Falih said it was premature to talk about exiting the cuts at least for a couple of quarters as the world was entering a season of low winter demand. He added that OPEC would examine progress at its next regular meeting in June.