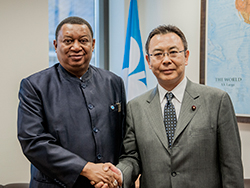 The Secretary General expressed his honour in receiving Yosuke Takagi at the OPEC Secretariat after having had the opportunity to meet with him recently at both the 15th International Energy Forum Ministerial Meeting in Algiers on 26-28 September and at the Abu Dhabi International Petroleum Exhibition and Conference (ADIPEC) on 13-16 November 2016 in the United Arab Emirates.

Mr Yosuke Takagi, conveyed, on behalf of his government, congratulations to Dr Mohammad Barkindo and on his new role as Secretary General of OPEC and commended him and the OPEC Member Countries on the historic agreement made at this week’s 171st Meeting of the Conference, which resulted in the implementation of the Algiers Accord, stipulating a reduction in OPEC production of about 1.2 mb/day to bring its ceiling to 32.5 mb/d. The agreement is effective as of 1 January 2017 and has a duration of six months, which is extendable for an additional six months depending on the prevailing market conditions.

The Secretary General remarked that the Minister’s visit comes at a crucial time, considering OPEC’s historic decision, which will help move forward the rebalancing of the world oil market. He then took the Minister and his accompanying delegation through a thorough explanation of the events and process that led to the oil market crash of mid-2014 and how OPEC has methodically worked since then to re-establish market stability through extensive consultations both within OPEC and with non-OPEC countries. He touched on the key meetings held in Doha and Algiers that helped build the necessary consensus to reach this week’s historic agreement.

The Secretary General pointed out that this landmark agreement and the resulting stability it is expected to bring to the market will not only benefit producers, but also consumers, such as Japan, the United States and other consumer countries.

Both the Secretary General and the Minster agreed to work together to maintain cooperation and dialogue, which will provide the necessary groundwork for future stability, investment and economic growth, adding this would be a win-win situation for all involved stakeholders.

The support and endorsement of the Vienna Agreement to implement the Algiers Accord, effective 1 January 2017, by a major consuming industrialised country, Japan, is a further demonstration of the global convergence of the interests of the producers and consumers of oil to restore stability to the oil market on a sustainable basis.