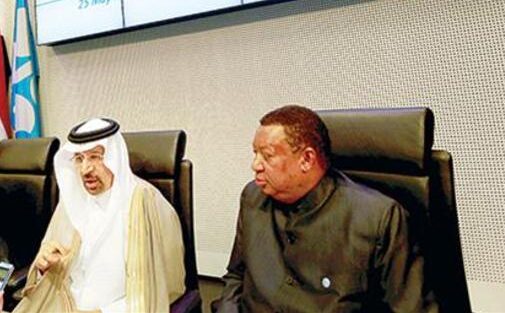 *Saudi Oil Minister, Khalid Al-Falih addressing the media while seated next to him is the OPEC Secretary -General, Mohammed Barkindo.

LONDON — OPEC oil output sank to a new five-year low in June as a rise in Saudi supply did not offset losses in Iran and Venezuela due to U.S. sanctions and other outages elsewhere in the group, a Reuters survey found.

The 14-member Organization of the Petroleum Exporting Countries pumped 29.60 million barrels per day (bpd) last month, the survey showed, down 170,000 bpd from May’s revised figure and the lowest OPEC total since 2014, the survey showed.

The Reuters survey suggests that even though Saudi Arabia is raising output following pressure from U.S. President Donald Trump to bring down prices, the kingdom is still voluntarily pumping less than an OPEC-led supply deal allows it to. OPEC renewed the supply pact at meetings this week.

Despite lower supplies, crude oil has fallen from a six-month high above $75 a barrel in April to below $63 on Friday, pressured by concern about slowing economic growth.

“The decision of OPEC+ at the beginning of the week to extend its production cuts has done nothing to change this,” Carsten Fritsch, analyst at Commerzbank, said of this week’s drop in prices.

“A series of disappointing economic data from the United States, China and Europe has sparked new concerns about demand.”

OPEC, Russia and other non-members, known as OPEC+, agreed in December to reduce supply by 1.2 million bpd from Jan. 1 this year. OPEC’s share of the cut is 800,000 bpd, to be delivered by 11 members – all except Iran, Libya and Venezuela.

The producers at meetings this week in Vienna extended the deal until March 2020.

In June, the 11 OPEC members bound by the agreement achieved 156% of pledged cuts, the survey found, more than in May, due to lower production in Iraq, Kuwait and Angola. All three of the exempt producers also pumped less oil.

The United States reimposed sanctions on Iran in November after pulling out of a 2015 nuclear accord between Tehran and six world powers. Aiming to cut Iran’s sales to zero, Washington this month ended sanctions waivers for importers of Iranian oil.

In Venezuela, supply fell slightly in June due to the impact of U.S. sanctions on state oil company PDVSA and a long-term decline in production, according to the survey.

Among countries pumping more, Saudi Arabia boosted supply by 100,000 bpd to 9.8 million bpd from May’s revised figure, the survey found. This is still below its OPEC quota of 10.311 bpd.

Output also rose in Nigeria – which last month overproduced its target by the largest margin.

June output was the lowest by OPEC since April 2014, excluding membership changes that have taken place since then, Reuters surveys show.

The Reuters survey aims to track supply to the market and is based on shipping data provided by external sources, Refinitiv Eikon flows data and information provided by sources at oil companies, OPEC and consulting firms.