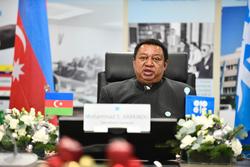 Vienna, Austria — The Organization of Petroleum Exporting Countries, OPEC has participated in the 31st Meeting of the Energy Charter Conference under the theme “Energy efficiency for all: Innovations and investments.”

The meeting was chaired by Parviz Shahbazov, Azerbaijan’s Minister of Energy and Chair of the Energy Charter Conference in 2020 and held via videoconference. It addressed several key topics with great relevance to the energy industry, such as sustainability, energy transition, investment, innovation, and the role of the public and private sectors

The OPEC Secretary General Mohammed Barkindo began his remarks by thanking Ilham Aliyev, President of Azerbaijan, for his dedication and commitment to the Declaration of Cooperation (DoC) and the rebalancing process in the global oil market, noting that the President’s tireless efforts have helped in building consensuses and keeping participating countries united.

“Azerbaijan has been a pivotal member of the DoC since its inception in 2016. President Aliyev was the first world leader to publically call upon OPEC and non-OPEC [countries] to close ranks and collaborate in order to rescue the oil industry. His visionary leadership honours his country’s incredible history,” Barkindo stated.

“OPEC is extremely supportive of measures to improve data transparency, particularly through our proactive role in the Joint Organizations Data Initiative. Additionally, we organise a multitude of meetings with our partners on the issue of data transparency, including with the IEA and IEF, as well as secondary source reporting agencies. Our aim is to constantly improve the accuracy and timeliness of data,” Barkindo said.

On the issue of investment, the Secretary General emphasized the importance of attracting new investments to the industry to ensure secure energy future and stable supplies.

He said: “The global oil sector will need cumulative investment of $12.6 trillion in the upstream, midstream and downstream through to 2045,” referencing OPEC’s World Oil Outlook 2020.

On oil market developments, the Secretary General briefed the meeting on the recent decisions adopted at the 12th OPEC and non-OPEC Ministerial Meeting, which saw the DoC’s participating countries reaffirm their commitment to a stable oil market.

The meeting was attended by several eminent leaders and dignitaries, including; Nurlan Nogayev, Kazakhstan’s Minister of Energy; and Urban Rusnák, Secretary General of the International Energy Charter.