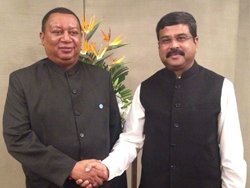 The meeting was attended by a group of accompanying OPEC senior officials and the Chief Executives of the ‘Group-7 of Indian Refiners’.

Both parties underscored the value of the ever-expanding cooperation between India and OPEC. Discussions focused on current oil market developments, the rapidly expanding Indian economy and its increasing importance for the global energy industry.

The Secretary-General praised India as one of the most dynamic countries in the world, particularly with regard to its rapidly expanding oil and gas industry.

He also underlined the impressive progress of bold new reforms in the country, which the Secretary-General noted ‘serve as a focal point for some of the leading joint projects being undertaken by OPEC’s Member Countries, who recognize India’s unprecedented growth potential’.

Minister Pradhan echoed similar views on the significance of the OPEC and India Energy Dialogue and made reference to five bilateral meetings that were held in the last year.

The Minister emphasized that India, which has experienced the world’s fastest growth in oil demand and will enjoy continued and sustained growth prospects in the medium- to long-term, will remain a natural partner to OPEC.

He stated that ‘India’s engagement with OPEC is important as India sources about 86% of crude oil, 75% of natural gas, 95% of LPG from OPEC Member Countries.’

He expressed appreciation for OPEC’s pivotal contribution to the ongoing market stabilization process, which is crucial for both producing and consuming countries.

The Secretary-General stressed the importance of the successful implementation of the historic ‘Declaration of Cooperation’ in accelerating the pace of the market rebalancing as reflected in declining levels of stock overhang, more robust oil demand and a gradual return of investments to the oil industry.

Both sides reiterated the importance of expanding dialogue through technical meetings in areas of mutual interest, as well as closer cooperation between NOCs in technology networking platforms.

The meeting occurred on the margins of the India Energy Forum where the Secretary-General delivered plenary remarks at a dedicated session. He had the opportunity to meet with leading industry stakeholders and oil company executives during this inaugural high-level forum.