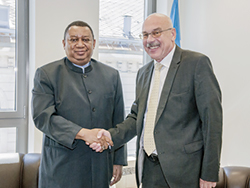 *HE Vladimir Voronkov (right) and HE Mohammed Barkindo.

Mr. Voronkov conveyed a message of congratulations on behalf of the Russian government to Mr. Barkindo for his new position as OPEC Secretary General. The Ambassador also presented him with a personal letter from HE Alexander Novak, Russia’s Minister of Energy, conveying his personal greetings and congratulations.

“We’re very satisfied with the cooperation between your and our experts”, Mr. Voronkov said. He noted that Minister Novak was looking forward to the IEF Ministerial Meeting to be held in Algiers in September. Separately, the Ambassador also noted that he would propose to the Minister that the next OPEC-Russia Dialogue take place in St Petersburg, so that we may show you more of our country.

The Secretary General said he was deeply grateful for Russia’s support and thanked Mr. Voronkov for his message. He praised the close relationship OPEC has with Russia, noting that Russia has been a strategic partner since the OPEC-Russia dialogue was instituted in 2005/2006. In fact, he said he was honoured to have led the first OPEC delegation to Moscow in 2006. This has since become a “win-win partnership” for both Russia and OPEC, Mr. Barkindo said. But the global industry as a whole benefits too.

The Secretary General then asked Mr. Voronkov to convey his appreciation to Minister Novak, adding that he looked forward to working very closely with him. Given current market conditions, which have not been favourable to producers or consumers, Mr. Barkindo said he looked forward to “regular dialogue and consultations” with the Minister.

Minister Novak is a “strong believer in our common cooperation”, said Mr. Voronkov. And he looks forward to regular cooperation with OPEC and to a “productive exchange of views”. Such close collaboration between OPEC and Russia, as well as between OPEC Member Countries and other energy producers around the world, will be critical, the Secretary General noted, in order to successfully overcome existing challenges.

The two officials discussed other issues as well, including growing long-term oil demand, market stability, and the future of the oil industry – which the Secretary General described as very promising.