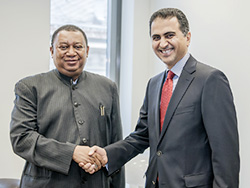 *HE Al-Mansouri right being received by HE Mohammed Sanusi Barkindo, The Secretary-General at the OPEC headquarters in Vienna, Austria.

Mr. Al-Mansouri expressed his congratulations on behalf of the Qatari government to Mr. Barkindo for his new position as Secretary General of OPEC and conveyed Qatar’s support for him in his new role. The Ambassador praised Mr. Barkindo’s extensive experience, particularly regarding OPEC.

The Secretary General praised Qatar’s support to OPEC and in the important role as President of the Organization. He also stated that he looks forward to more meetings and collaboration with Qatar.

The Ambassador praised the staff at the OPEC Secretariat, saying they continually display a high degree of professionalism. In appreciation of this, the Secretary General said OPEC has a long tradition of getting high-quality people from its Member Countries.

The Secretary-General said he had received an invitation from HE Dr. Mohammed Bin Saleh Al-Sada, Qatar’s Minister of Energy and Industry, and current OPEC President, and said he would be visiting Qatar in due time.