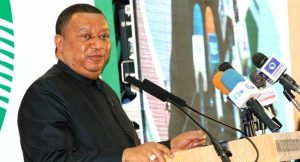 29 March 2018, Sweetcruude, Lagos – Secretary-General of the Organisation of the Petroleum Exporting Countries, OPEC, Dr. Mohammad Barkindo, has said the group is working on a “very long-term” deal in trying to extend its alliance with other oil producers.

He disclosed this at an energy conference in Baghdad, Iraq on Wednesday, according to CNBC.

Barkindo’s comments followed news at the start of the week in which Saudi Arabia’s Crown Prince, Mohammad Bin Salman, told Reuters that “We are working to shift from a year-to-year agreement to a 10-20 year agreement.”

Both Saudi Arabia and non-OPEC producer Russia have borne the biggest cuts in the ongoing OPEC oil cut deal, under which the body and its allies led by Russia agreed to slash production by 1.8 million barrels per day in a bid to clear the glut in the market and grow prices.

Prices have since the deal came into effect shot up, reaching $71 per barrel in January, but is now trading below $65 per barrel.

OPEC recently reported a 135 percent compliance with the cut deal which has been extended twice until the end of 2018, although it hopes to extend it beyond the year.