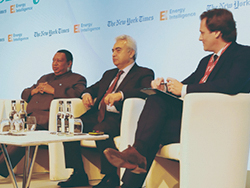 He made the disclosure while speaking at an oil and money conference in London while reiterating the significance of the recent Algiers agreement taken by the Organization at the 170th (Extraordinary) Meeting of the OPEC Conference in helping restore balance and sustainability to the oil market.

He was joined by the Executive Director of the International Energy Agency, Dr Fatih Birol, on a two-man panel session at the Oil & Money conference in London. The session was moderated by Alex Schindler, News Editor at Energy Intelligence.

Talking about the current oil market environment, Dr. Barkindo stressed that the agreement was driven by supply fundamentals, specifically the high level of inventories that had built up in recent years on the back of excess supply, often from high-cost regions. He said it was vital to see a continued drawdown in stocks and to quicken the market rebalancing process.

Both Dr. Barkindo and Dr Birol highlighted their concern about the drop off in investments in the current cycle. Dr Birol said that the recent downturn in investments was unprecedented for the industry and added that new investments were not only needed for new fields, but also to cater for declines in existing ones.

HE Barkindo said it was vital to restore investments in a sustainable manner and added that OPEC’s latest World Oil Outlook sees oil-related investments requirements of $10 trillion in the period to 2040.

Later in the day, Dr. Barkindo also attended the Energy Intelligence Petroleum Executive of the Year Award Presentation and Dinner. This year the recipient was HE Khalid A. Al-Falih, Minister of Energy, Industry and Mineral Resources, Kingdom of Saudi Arabia and Chairman of the Board of Directors, Saudi Aramco.