Opening address to the 171st Meeting of the OPEC Conference

on: November 30, 2016In: Conferences/Seminars, featured, Oil

By HE Dr. Mohammed Bin Saleh Al-Sada, Qatar’s Minister of Energy and Industry and President of the OPEC Conference 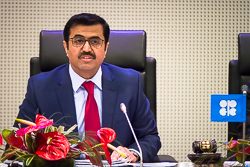 Excellencies, ladies and gentlemen, welcome to Vienna for the 171st Meeting of the OPEC Conference.

As OPEC Conference President, we would like to offer a very warm welcome to His Excellency Ignasius Jonan, Indonesia’s Minister of Energy and Mineral Resources, who is attending a meeting of OPEC Ministers for the first time.

We would like to extend our sincere appreciation to the work of his predecessor in office, His Excellency Sudirman Said, who oversaw Indonesia’s reactivation of its OPEC Membership at the end of last year.

We would also like to warmly welcome a number of Ministers to a Vienna OPEC Conference for the first time.

His Excellency Noureddine Boutarfa, Algeria’s Minister of Energy, who of course made an enormous contribution in helping the Organization deliver the landmark ‘Algiers Accord’ at the 170th (Extraordinary) Meeting of the OPEC Conference at the end of September.

The last time we met as a Conference was in Algiers on September 28. This historic occasion, with OPEC Member Countries unified in approving the already mentioned ‘Algiers Accord’, saw an agreement on a new OPEC-14 production target range.  The focus was on accelerating the drawdown of the stock overhang and bringing the market rebalancing forward.

The Accord also saw the establishment of a High-level Committee to study and recommend the implementation of the production level of Member Countries.  In addition, the Committee was tasked with developing a framework of high-level consultations between OPEC and non-OPEC oil-producing countries, including identifying risks and taking pro-active measures that would ensure a balanced oil market on a sustainable basis.

Over the past two months, this Committee has done some excellent work. The meetings it has undertaken have been extremely constructive, providing us all with a better appreciation and understanding of the various viewpoints among OPEC and non-OPEC producers.

On behalf of the Organization, I would like to express our deep appreciation to those who have been involved in these meetings.

In the period since the ‘Algiers Accord’ was agreed, we have also seen extensive bilateral and multilateral consultations, across countries and continents, and between Ministers, as well as Heads of State.

Here, I would also like to highlight the diplomacy work of the OPEC Secretary General, His Excellency, Mohammad Sanusi Barkindo, who has paid visits to a number of our Member Countries and engaged in extensive talks with both OPEC and non-OPEC producers.

These further exhaustive efforts to build consensus among all producers have been vital to the process.  The efforts made have been laudable.  I am very hopeful that the positive talks will continue here in Vienna today leading to a mutually acceptable solution on the way forward.

OPEC fully appreciates the importance of bringing forward the rebalancing of the fundamentals and returning sustainable stability to the market.  This will be beneficial to our economies, the global oil market and the world economy as a whole.

In examining the current market, we can grasp the urgency of the situation.

When we met in Algiers on September 28, the OPEC Reference Basket stood at just above $42/b. The agreement reached in Algiers was effective in arresting any further deterioration in prices and also helped reduce relative volatility.  In fact, the Reference Basket climbed to above $49 by mid-October.

However, the price then started falling and by November 14 it had dropped below $41/b, although there has been an uptick since.  The past month or so has shown that price volatility is still a significant concern.

From the supply and demand perspective, there are signs that the rebalancing of the fundamentals is underway.

World oil demand is expected to grow at healthy levels of around 1.2 million barrels a day in both 2016 and 2017.

In addition, global economic growth forecasts remain reasonable for both 2016 and 2017, at 2.9 per cent and 3.1 per cent respectively.

Nonetheless, as we have repeated on many occasions throughout the year, the large stock overhang continues to be a major worry.

Despite the fact OECD commercial oil stock levels this year have seen little change, with the total level in September only slightly higher than that seen in January, they remain stubbornly high.  Moreover, they are still more than 300 million barrels above the five-year average.

Furthermore, we also need to recognize that in recent years we have also seen a rise in non-OECD inventories, plus an expansion in some non-OECD strategic petroleum reserves.

It is vital that stock levels start to fall, as the decision taken in Algiers recognized. As we have seen in previous cycles, once this overhang starts falling on a regular basis then prices start to rise and more stability will return to the market.

It is also important to underscore that we need to not only consider the short-term, but the medium- and long-term as well.  Of course, the short-term directs our current thinking, but as we all know, this is very much a medium- to long-term business.

In this regard, let me reiterate two key points I have made on many occasions.

Firstly, this remains a growth business, with oil demand in OPEC’s 2016 World Oil Outlook reaching over 109 million barrels of oil a day by 2040, a healthy increase of over 16 million barrels a day.

And secondly, this growth will require significant investments in the upstream, midstream and downstream.  Overall, estimated oil-related investment requirements are close to $10 trillion in the period to 2040.

We need to ask ourselves whether the situation that has evolved over the past two years or so is putting this future at risk.  Global spending on exploration and production investments fell in both 2015 and 2016, and some are now even talking about this continuing.  A third year of investment falls would be unprecedented for the industry.

As the history of OPEC has shown and as many of our predecessors will no doubt acknowledge, the road to success is not always easy to navigate.  However, as we have shown over the past few months, with hard work, drive and commitment from all of us, we can overcome challenges and obstacles through cooperation and compromise.

I feel we have already taken great steps to shape a fair and common understanding among us all.  And I have the sense that everyone here remains committed to ensuring we find the solutions needed to implement the ‘Algiers Accord’.  We all have a common goal of developing a lasting solution that brings forward the rebalancing process, reduces the length of the downturn, lessens volatility and stabilizes the market.