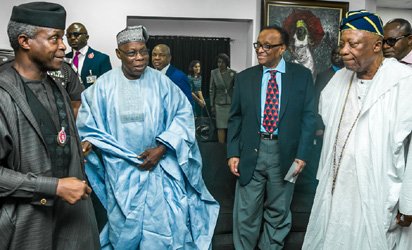 13 December 2017, Sweetcrude, Lagos – Vice President Yemi Osinbajo on Tuesday, at the commissioning of the Petrolex Group tank farm in Ibefun, Ogun State, invited investors to take advantage of potentials in petrochemicals and fertiliser production in the country.

Describing the petrochemicals and fertiliser as crucial to the government and the country, the vice president said the government would like to see credible investments in those areas.

He disclosed that the Federal Government was looking at instituting a preferential interest rate for manufacturing, adding that President Muhammadu Buhari had already constituted a committee in that regard, headed by him (the vice president).

Osinbajo, who stated that the committee was already meeting with manufacturing sector players, said the plan would boost manufacturing.

On the 300 million litre capacity Petrolex tank farm, the vice president said it was a testimony to the Nigerian vision and that it will strengthen the nation’s petroleum products distribution system.

According to him, it will also improve retail distribution in Nigeria and ensure increased income through the jobs it will create in addition to boosting economic activities in the Ibefun community where it is located.

He congratulated the board and management of the company for their success in putting up the facility, saying their success sends a strong signal to the international community that Nigeria had credible local investors.

Also speaking at the event, the Minister of State for Petroleum, Dr. Ibe Kachikwu, expressed admiration for the courage and dream of Mr. Segun Adebutu, the Managing Director and Chief Executive Officer of Petrolex, and his team in putting up the facility.

“We will work collaboratively with you and give you all the support to make this place work,” the minister assured.

The commissioning ceremony was attended, among others, by ex-President Olusegun Obasanjo, the Secretary to the Ogun State government, Mr. Taiwo Adeoluwa, who represented the state governor, Mr. Ibikunle Amosu; the Group Managing Director of the Nigerian National Petroleum Corporation, NNPC, Dr. Maikanti Baru; senators and members of the House of Representatives.

Also present were captains of industry, the business mogul, Sir Kesington Adebukunola Adebutu, the Awujale of Ijebu land, the Alake of Egba and His Royal Majesty Oba Gideon A.O. Adetoye, the Liken of Ibefun.