on: October 13, 2017In: Community Development, featured 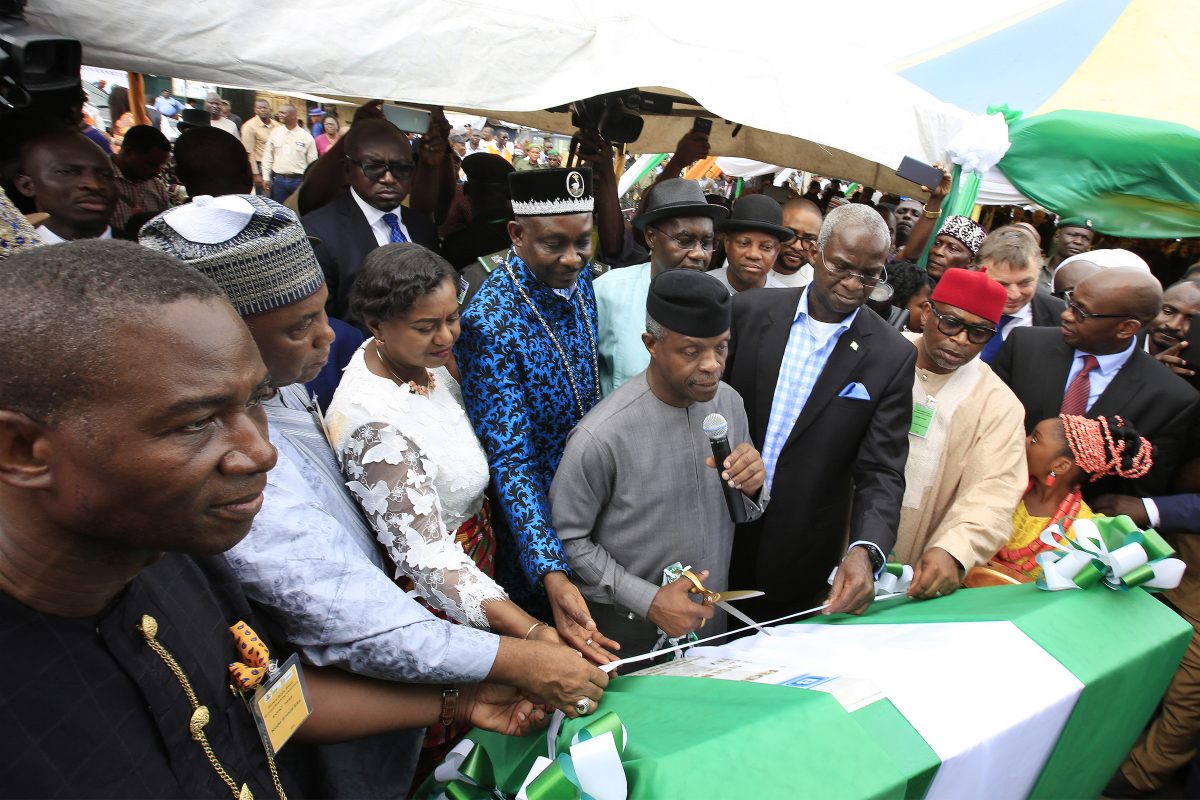 Prof. Yemi Osinbajo (middle) flagging off the construction of the Bonny-Bodo Road.

Michael James 13 October 2017, Sweetcrude, Lagos – Vice President Yemi Osinbajo, Thursday, in Bonny flagged off the construction of the N120 billion Bonny-Bodo road to be jointly funded by the Nigeria LNG Limited (NLNG) and the Federal Government, through the Federal Ministry of Power, Works and Housing.

Nigeria LNG is contributing the sum of N60 billion to the project.
At the ceremony, Professor Osinbajo said “the idea behind Bonny-Bodo road project is almost 40 years old but up till now, it has remained mainly an idea.
“This is a public-private partnership arrangement in which the Federal Government and Nigeria LNG Limited will each bear 50% of the N120 billion that it will cost to construct the road. This is the latest in the series of similarly transformational infrastructure partnerships going on across the country. Our gratitude goes to NLNG for their enthusiasm and their cooperation and for putting their money towards this landmark project. I hope other companies and corporation will emulate them in this regard.”
Managing Director and Chief Executive Officer of NLNG, Tony Attah, remarked that “the success of this project, for all that it will cost the Federal Government and Nigeria LNG as co-financiers and Julius Berger Nigeria as the project executor, will definitely be the highest and most remarkable accomplishment from a collaboration that is novel to our nation’s infrastructural development.”
“Besides, we believe this project effectively re sets the tone for infrastructure development in the Niger Delta and Nigeria as a whole. It is also a significant symbol of the impact that public-private sector collaboration can have on the nation’s overall development.
“The provision of this road aligns with the company’s aspiration to support the improvement of social amenities and human capital development. Our greater joy is that the road will ease the plight of residents in Bonny Island, the community that has hosted the Nigeria LNG Plant and other oil and gas operations for decades. Above all, our support for this road project is in fulfilment of our commitment to the development of our host communities in the Niger Delta region,” he added.
The Chief Host at the ceremony, Governor of Rivers State, Chief Nyesom Ezenwo Wike, represented by the Deputy Governor of Rivers State, Dr Ipalibo Harry Banigo, said: “The Rivers State government is happy to partner with the Federal Government of Nigeria, NLNG and other development partners to carry out programmes, policies and projects that positively impact on the lives of our citizenry. This is why we regard today’s programme as highly commendable. I urge NLNG to proceed with good speed on the kick-off of Train 7.”
In his remarks, the Royal Father of the day, the A‎manyanabo of Ancient Grand Bonny Kingdom, King Edward Asimini William Dappa Pepple III, said: “I want to appreciate NLNG for remaining steadfast and standing firmly with us to ensure that this project is supported to the tune of N60 billion, which is half of the entire cost of the project. In the face of obvious delays, NLNG remained steadfast with us. NLNG persisted and the company has demonstrated their commitment to the development of this kingdom. We signed an agreement on sustainable development and that agreement can’t be successful without some critical factors of which are the reasons why this road project is very important.”
Describing the road, the Minister of Power, Works and Housing, Barrister Babatunde Fashola, said: “This is a 40 kilometre road from Bodo to Bonny Island. In between it are three bridges – a 1000 metre bridge across the Opobo creek, a 640 metre bridge against the Nanabie Creek and a 550 metre bridge against the Afa Creek. This will ultimately connect all of the communities and hopefully in a time not too far away, we can drive to Bonny Island from Bodo.”
Other dignitaries who graced the event are NLNG’s Deputy Managing Director, Sadeeq Mai-Bornu; Chairman, Senate Committee on Works, Senator Kabiru Gaya; Chairman House Committee on Works, Honourable Toby Okechukwu; Senator Magnus Abe; Chairman, House Committee on Gas Resources, Honourable Fredrick Agbedi; the Director General of the Nigerian Maritime Administration and Safety Agency (NIMASA), Dakuku Peterside; Julius Berger Managing Director; Wolfgang Goetsch; Chief Operating Officer, Corporate Services at the Nigerian National Petroleum Corporate and former Deputy Managing Director of NLNG, Isa Inuwa, among others.
The ceremony comes a month after NLNG signed a tripartite agreement in Abuja with the Federal Government, represented by the Ministry of Power, Works and Housing, and Julius Berger Nigeria Plc to construct the road connecting several communities in Rivers State.
The 34 kilometre road is expected to open up great opportunities for rapid socio-economic development of the area and impact on lives of the millions of Nigerians, mainly from the Niger Delta, living on Bonny Island, as well other Niger Delta communities like Ogoni, Okrika, Eleme, Andoni, etc.
The road project has been on the drawing board since the 1970s.
NLNG’s financial contributions to Nigeria and the Niger Delta have been significant. It has generated more than $90 billion in revenues as at 2015, paid $5.7 billion in taxes and committed more than $200 million to corporate social responsibility projects in the Niger Delta especially in the areas of capacity building and infrastructure development.
The company also recently signed a Memorandum of Understanding with Bonny Kingdom for the economic development of the Kingdom over a 25-year period. In that MOU, NLNG committed N3 Billion per annum which cumulatively, is N75bn in 25 years to the sustainable development of Bonny.