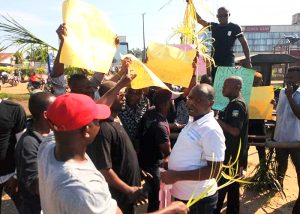 17 October 2018, Sweetcrude, Port Harcourt — The Osisioma Ngwa Youth Congress in Abia State has issued a 24-hour ultimatum to the Nigerian National Petroleum Corporation, NNPC, to refute its claim that the pipeline explosion on its system 2E network which claimed the lives of over 100 people in Osisioma, near the corporation’s Aba depot, happened due to vandalism.

The ultimatum follows the NNPC management’s statement on Saturday, claiming that the incident might have been caused by suspected oil thieves who had hacked into the line to intercept the flow of petrol from Port Harcourt to Aba.

Spokesperson of NNPC, Mr. Ndu Ughamadu, had in the statement confirmed fatalities and loss of properties in the fire, while quoting NNPC GMD, Dr Maikanti Baru, as warning members of the public against tampering with oil and gas facilities, which he said were inflammable.

But the youth group, which staged a peaceful protest at Aba depot on Monday, warned that failure by NNPC to refute the vandalism allegation within 24 hours and explain to the communities what actually led to the incident, would incur the wrath of the youths.

Public Relations Officer of the group, Mr. Nwabueze Princewill, accused the Depot Manager of NNPC Aba Depot of refusing to identify with the bereaved communities by way of visit to the incident scenes or the hospitals where survivors were receiving treatment.

Princewill explained that the said pipeline has been out of use for over three years, adding that there has never been any issue of vandalism in the affected communities and questioning what NNPC stands to gain by blackmailing the communities.

While blaming NNPC for negligence over the incident, he explained that the leakages which led to the deadly explosion on Friday was observed and reported since Thursday, but NNPC did nothing about it till the explosion on Friday.

According to Princewill, “The attention of Osisioma Ngwa Youth Congress has been drawn to a statement made by the NNPC, claiming that the multiple inferno in Osisioma Ngwa was as a result of pipeline vandalism.

“We characterise this as a malicious attempt by the company to blackmail the victims of their own negligence, even in their pains. It’s also a deliberate but cheap effort to mislead the public and to twist facts”.

He added: “There is no issue of pipeline vandalism  here in Osisioma. We have led different teams of security personnel to the various sites, and the evidences confirmed our position.

“This incident is purely a consequence of negligence by the NNPC. And to vindicate us further, there’s been more leakages detected, and despite several calls to the NNPC, there has been no response, even in the wake of the recent tragedy that has cast a dark cloud over the community.

“These lies from a company that should at this point be remorseful, only serves to inflame further our emotions.

“Many of us have no homes to return to now, not even clothes to change into. Acres of farm lands have been destroyed. While we were still protesting, over 13 persons were being buried at home. As at this point, over 124 persons have being buried.

“We are giving them the next 24 hours to counter the press statement in which they pronounced us vandals. Until we get justice, we will not relax.”

He described the claims of vandalism as cheap defence from NNPC, adding that the pipeline has been faulty for over three years now due to lack of maintenance and has been abandoned by NNPC for the past three years.

While maintaining that the communities would take legal action against NNPC on the matter, Princewill said that the group would carry out estimation and valuation of lives and properties lost in the avoidable incident.

“We have written many letters before now to NNPC on this pipeline but to no avail. We have copies of letters we sent to NNPC before now, which they have acknowledged receiving but did nothing about it (pipeline), instead they went ahead to pump products into it.”