25 November 2015, Ughelli—Hundreds of workers at the OML 34 Otorogu gas plant in Ughelli South Local Government Area of Delta State have protested the non-payment of theier salaries in the last seven months. 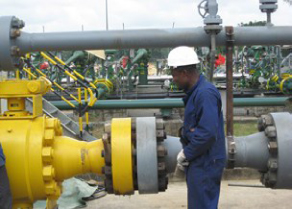 The workers are also demanding the sack of the company’s superintendent, Mr. Yomi Ogunola for his alleged neglect of their welfare leading to the backlog of unpaid salaries.

The protesters with placards some of which read,  “Mr. Yomi Ogunola must go,” “Pay us our 7-months salary arrears,” “Staff us under operational and maintenance,” among others, accused the company of enslaving them despite the efforts they have put into the company.

Speaking on behalf of the workers, Coordinator of the Otorogu Gas Plant workers union,  Gabriel Mukoro, while accusing the company of insensitivity, appealed to the state and federal governments to intervene in their plight by urging the management of  Nigerian Petroleum Development Company, NPDC, to do the needful.

Addressing the protesters, the company’s superintendent,  Ogunola, lamented the protest by the workers and assured them that he will forward their grievances to the appropriate authorities saying, “I can assure you that in the next couple of weeks everything will be okay.”