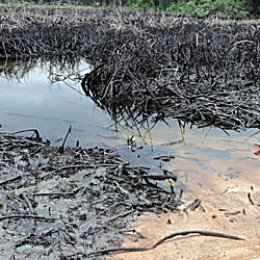 10 December 2018, News Wires — At least 60,000 liters of oil spilled into Rio de Janeiro’s Guanabara Bay over the weekend after a robbery attempt on a pipeline owned by a subsidiary of state-run Petroleo Brasileiro SA.

In a statement, Petroleo Brasileiro unit Transpetro said oil had spilled into a river feeding Guanabara Bay. The company had managed to clean up over half of the oil so far, it said, and it had alerted authorities and activated its emergency clean-up teams immediately upon learning of the spill.

Transpetro and Petrobras, as Petroleo Brasileiro is commonly known, have become frequent targets of theft in recent years, as gangs steal millions of dollars a year of oil and derivatives and resell it on the black market.

“It was a leak of significant proportions, with an impact on the mangroves,” said Maurício Muniz, an analyst at the Instituto Chico Mendes, which is associated with Brazil’s environment ministry.