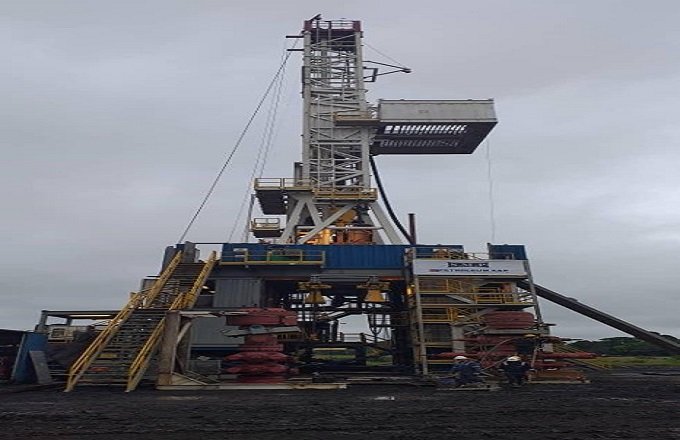 *A drilling rig working on the Delta de la Cuvette

JOHANNESBURG, South Africa — The recent onshore discovery made in the Delta de la Cuvette deposit in the Republic of Congo is a game-changer for Congo and Africa.

The discovery was announced on August 10th by SARPD Oil and PEPA, a Congolese consortium working as operators on the Block.

Early projections indicate that the discovered deposits could produce up to 359 million barrels of oil, or 983,000 bopd, from Congo’s central province.

This could in effect quadruple Congo’s production, which currently stands at over 330,000 bopd according to OPEC’s latest figures. Production has been steadily increasing in recent years, with a target set by the government of reaching 400,000 bopd by 2020.

“This is our first onshore discovery and it gives us a lot of hope that we shall make more discoveries especially now that we are to award more blocks for oil exploration in the ongoing oil licensing round,” said the H.E. Jean-Marc Thystère-Tchicaya, Minister of Hydrocarbons of the Republic of Congo

The Delta de la Cuvette deposit covers 9,392 m2 and comprises four wells, the first has been drilled in March of this year. When fully exploited, the license could propel Congo as Africa’s third-largest oil producer, ahead of Algeria and Libya.

“This is in effect one of the largest African oil discovery in decades,” declared Nj Ayuk, Executive Chairman of the African Energy Chamber and CEO at the Centurion Law Group.

“Africa has been an exploration hotspot where major oil & gas discoveries have been made in recent years by international explorers. The Oyo discovery in Congo, however, is the result of indigenous efforts made by Congolese companies. It speaks volumes to the value that local content development can create when local companies and entrepreneurs are given an opportunity to contribute to their industry. I want to urge the government to work with the industry to expedite the approvals for the necessary field development efforts. This is a win for Congo and for Africa.”

The discovery is also a game-changer for Congo’s energy scenario, with most oil & gas production currently coming from offshore fields. The Republic of Congo has been pushing for years to open up energy access to its central and northern provinces, notably through the planned 1,200km pipeline between Pointe Noire and Ouesso. The exploitation of such large oil deposits in the centre of the country could open up a whole new energy frontier for Congo and the rest of the region.

The African Energy Chamber looks forward to seeing the full development of the license creating jobs for Congolese, and opportunities for Congolese companies and entrepreneurs to service one of Central Africa’s largest upcoming onshore development.

Such a discovery has the potential to spur considerable economic growth for Congo and its central and northern provinces, especially as the country keeps recovering from a recent economic crisis due to plummeting oil prices. The IMF predicts a GDP growth of 5.4% in 2019, the highest in Central Africa.

Congo has 2 billion barrels of proven oil reserves from about 20 fields being exploited and about 10 permits granted and waiting to be developed.

Its proven gas reserves stand at 200bn standard cubic metres over 20 years, according to the government, including 70bn of associated gas.

While gas production stands at about 400bcf, various gas valorization and monetization projects are being supported by the government to generate diversification and economic growth.

Congo estimates that it can monetize about 100bn standard cubic metres of gas by integrating various gas valorization projects in the country via a gathering and transportation system which is to be operational by 2020.