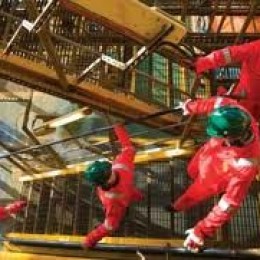 05 October 2012, Sweetcrude, ABEOKUTA – THE Petroleum and Natural Gas Senior Staff Association of Nigeria, PENGASSAN, has assured workers of the Pipeline Products Marketing Company, PPMC, of maximum support should they decide to down tools over failure of government to find their missing colleagues attacked by vandals when they went to repair the damaged pipeline at Arepo, Ogun State, dead or alive.

President of PENGASSAN, Comrade Babatude Ogun, while speaking in Abeokuta, Ogun State, at the opening ceremony of the 3rd Triennial Delegates Conference of PENGASSAN branch of PPMC, described the Minister of Petroleum Resources, Mrs. Diezani Alison-Madueke, as insensitive to plights of workers in the oil and gas industry.

Ogun said: “The minister that has the oversight over the oil and gas industry does not care about the workers. Since the minister assumed duties, she has never met with the workers.

“Every entreaty and effort to meet with the minister and tell her our challenges failed be- cause the minister is not ready to listen.

“We, including our sister union, the National Union of Petroleum and Natural Gas Workers, NUPENG, have also tried to reach the minister through the Minister of Employment, Labour and Productivity and that also yielded no result.”

He also berated the Group Managing Director of the Nigerian National Petroleum Corporation, NNPC, Andrew Yakubu, avoiding meeting the two unions, PENGASSAN and NUPENG, since he assumed office some months ago.