on: October 17, 2017In: Community Development, featured 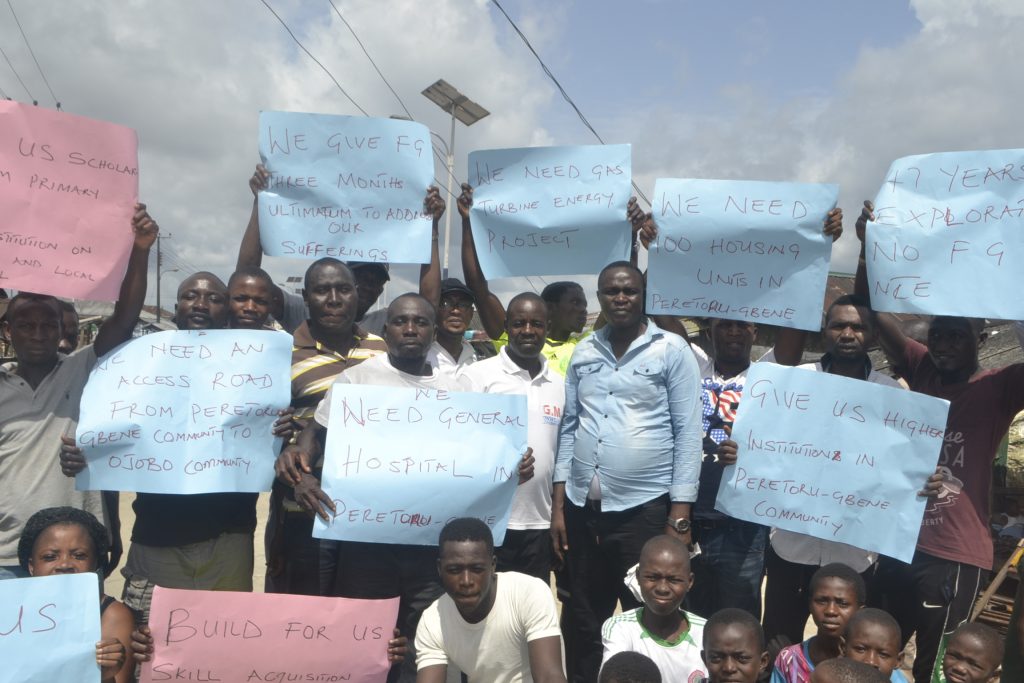 17 October 2017, Sweetcrude, Lagos — The people of Peretorugbene Federated Communities in Ekeremor Local Government Area, Bayelsa State, have protested what they described as federal government neglect 47 years after Shell Petroleum Development Company, SPDC began exploration of crude oil and gas on their land.
They carried placards with inscriptions such as, “build skill acquisition center in Peretorugbene Community”, “we need portable drinking water”, “give us women empowerment”, “give us scholarships from primary to higher institutions”, “we need general hospital in Peretorugbene”, “we need gas turbine for electricity”, “we need 100 housing units of 3-bedroom each” and “we need access road from Peretorugbene to Ojobo Community.”
Our Correspondent who covered the peaceful protest, reports that Peretorugbene indigenes averred that they will not allow their peaceful disposition to be taken for granted, even as they noted, “we don’t see violence as the best approach for agitation.”
A leader in the community, Comrade Bossman A.M.B. Amoda who spoke townsmen during the protest, stated that they appreciate President Muhammadu Buhari for approving pipelines ‘surveillance job for people of the oil and gas producing communities in the Niger Delta, saying it will go a long way to compliment the efforts of government security agencies in the protection of critical crude oil and gas National assets.
According to him, the surveillance job will address youth restiveness and other social vices plaguing the petroleum sector, particularly in the Niger Delta.
The Community Vice Chairman, Jagua Podoki, the youth president, Comrade Dirifa Okoyen, Comrade David George, a former Chairman of the oil and gas-rich community and Bekere Perez, were among leaders of the Bayelsa Community that bare their frustration during the protest.