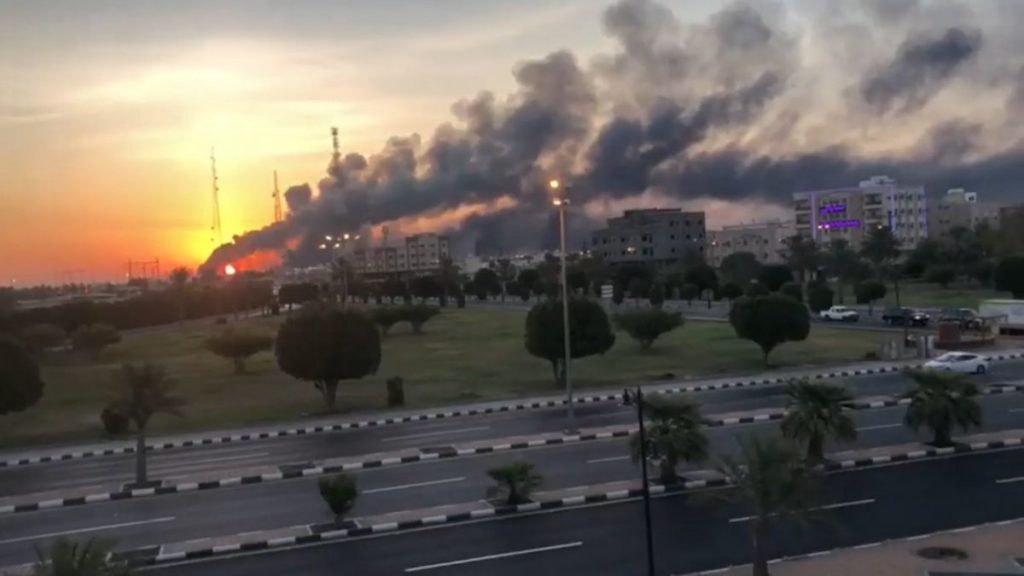 *Smoke plumes rising into the air from the Houthi attack on Abqaiq.

*Drone attacks on Saudi Aramco will severely disrupt NGL and petrochemicals supply – much more than oil. The impact on global economic and geopolitical dynamics will be huge

Lagos — The drone attacks on Saudi Aramco’s oil and gas facilities and key infrastructure will have significant ripple effects in the global energy and petrochemical markets, as well as the global economy, as oil prices rise and natural gas production is disrupted.

Aramco initially took half its oil production – about 5.7m bbl/day – offline. On 17 September it said in a statement that crude oil processing at Abqaiq was running at 2m bbl/day and that output is expected to be restored to prior rates by the end of September.

The statement did not mention the status of ethane or liquefied petroleum gas (LPG) production. Natural gas indeed could be the bigger issue.

“While Aramco is likely to resume full oil production within a few days or a week, they will begin flaring associated gas in the Gawar field and produce only as much as the remaining intact capacity at Abqaiq will support,” said Dan Lippe, managing partner at Petral Consulting, on 16 September.

“Without definitive information, we can reasonably say that NGL (natural gas liquids) supply will be reduced for a few months to several months,” he added.

Crude oil prices shot up on 16 September, with the Brent futures contract spiking 15% to $69.02 and US WTI also up 15% to $62.90. Brent prices retreated 7% and WTI 6% on 17 September on reports that oil production would be restored reasonably quickly.

“Crude oil has an 80%+ correlation to the ICIS Petrochemical Index (IPEX). A $10/bbl increase in Brent typically has a 5.5% increase in the market price of petrochemicals in the IPEX,” said James Ray, senior consultant at ICIS.

The further down the value chain a product is, the less impact crude oil prices have, but almost every product will see upward price pressure to some degree,” he added.

For the petrochemical sector, there is the direct impact on Saudi Arabia’s chemical operations. On 14 September, Saudi Arabia’s new Energy Minister Abdulaziz bin Salman said ethane and NGL production has been cut by 50%.

The attacks threaten 10% of global ethylene supply, according to an analysis of the ICIS Supply & Demand database.

SABIC outlined feedstock disruptions of the order of 49% on average at its sites across the kingdom.

Companies with operations in Jubail include SABIC and its affiliates, Tasnee, Sipchem and Advanced Petrochemical, as well as the Saudi Aramco joint ventures with Chevron (S-Chem) and Dow (Sadara), noted Alembic’s Ahmed.

Saudi Arabia is a major exporter of petrochemicals and polymers to Asia and Europe, and also exports crude oil to Asia’s refineries and petrochemical facilities, where a shortage of feedstock could inhibit local production.

The rise in the price of crude oil itself will hit petrochemical producers in Europe and Asia, which mostly rely on oil-based naphtha feedstock.

A rise in oil prices in turn raises the competitiveness and margins of US petrochemical producers which mainly use NGLs ethane, along with propane and butane.

As oil prices rise, this drives petrochemical and polymers prices higher. US petrochemical margins, largely based on abundant local ethane from shale gas, would widen.

“We see three main impacts… on US petrochemical producers: an expansion in the US cost advantage, US gains in market share of the export markets, and margin expansion via higher global petrochemical prices,” said Alembic’s Ahmed.

If Saudi Arabia NGL production is severely curtailed for months, it could have a profound impact on China’s imports of propane and petrochemicals, to the extent that it could change its trade policy, according to Petral’s Lippe.

“The reduction in propane exports from Ras Tanura (in Saudi Arabia) will be enough to tip the Asian balance from surplus to shortage. Almost definitely, China will have to suspend tariffs on US propane imports,” said Lippe.

“Most likely, since ethane for SABIC ethylene production is also short, SABIC PE exports will be reduced and China will have to suspend tariffs on US imports,” he added.

Even if China does not actually suspend tariffs on US propane and PE, it may be more inclined to reach a trade deal with the US.

For the global economy, sharply higher oil prices represent yet another major risk.

A synchronised global economic slowdown – most pronounced the manufacturing sector – is well underway, exacerbated by the US-China trade war.

For the struggling automotive sector, higher oil prices only add to the cost of operating a vehicle at a time when consumers are shying away from big ticket items amid growing uncertainty.

Much will depend on where oil prices settle. Can slowing global economies absorb $70/bbl Brent? What about $80/bbl or higher? Every US recession since the 1970s has been preceded by a spike in crude oil prices.

And China’s economy, already reeling from US tariffs, would face another major headwind as the number-one importer of crude oil. Other oil-import dependent countries such as India, Japan and South Korea would also suffer.

Central banks around the world already are in a loosening mode. This weekend’s attacks and rising oil prices pose a bit of a conundrum.

Will they view this as a further threat to economic growth and thus be further inclined to cut interest rates? Or could they view the effect as inflationary? It will likely be the former.

Meanwhile, the impact on the US economy from sharply higher oil prices – while still a net negative – would be mitigated by its growing oil production from prolific shale basins.

The US Energy Information Agency (EIA) projects US crude oil production to average 12.2m bbl/day in 2019 – up by 11% year on year – before rising another 8% to 13.2m bbl/day. The US is already the world’s leading producer of crude oil and moving towards a net export position in the coming years.

Yet, US shale oil and gas producers have been struggling mightily since the crude oil price collapse in late 2018, especially small and mid-size companies that have taken on large amounts of debt.

“The current debt level of US shale gas companies is $250bn and much of it is due in the next five years,” said Stephen Bowers, feedstock and petrochemical technologies manager at Evonik, at the 8th European Butadiene and Derivatives Conference in Vienna, Austria on 12 September.

These companies are now reducing rigs and drilling less, trying to fund operations from free cashflow, he noted.

This threatens the optimistic projections of a surge in US oil and NGL production, and the scenario of cheap and abundant feedstock for the US petrochemicals sector, said Bowers.

However, if there is a sustained rise in oil prices, this could effectively act as a bailout of the struggling US shale oil and gas sector, allowing many small and mid-size companies to avoid bankruptcy.

SHIFTING ROLE OF US

The US, because of its much lower dependence on imported oil, is less likely to engage in a major war in the Middle East over hydrocarbons – a huge shift compared with 10 years ago. It’s arguable that there would have been an immediate US military response to such a strike on critical oil supplies a decade ago.

In the long term, as the US achieves energy independence, it may not be the major police presence in the Middle East. This responsibility may shift to other crude oil dependent nations.

Peter Huntsman, CEO of Huntsman, suggested as much earlier in March at the International Petrochemical Conference (IPC), hosted by the American Fuel & Petrochemical Manufacturers (AFPM).

With the US energy neutral and much of the oil and gas going to Asia and Europe, “who is going to protect that oil flow?” asked Huntsman. “You can see why China is getting more aggressive in building a navy.”

But what about the biggest risk on the table – that of a major military strike against Iran and a potential full-blown war in the Middle East involving Saudi Arabia, Iran and the US, and others?

That would cause a real spike in crude oil prices and put supply at much greater risk. It also would add to greater global geopolitical uncertainty in a big way.

The risk to future Middle East exports of oil and petrochemicals will depend on the level of escalation.

“Around 20% of all petrochemicals exports either move through the strait of Hormuz or past Yemen. Shutting down the straits, or disrupting Saudi production further would have a meaningful impact on global supply of most petrochemical chains,” said Jonas Oxgaard, analyst at Bernstein.

“For example, around 15m tonnes of PE (22% of global production) is produced annually in Saudi Arabia, UAE, Iran, Kuwait, Qatar and Iraq and practically all of it is exported. While some Saudi exports originate on the west coast, this does not make it risk free… For methanol, it is even more stark – while only 10% of global supply is produced in the Middle East, 43% of the world’s exports originate there,” he added.

Ultimately, more turmoil in the Middle East and the glaring threat against major oil and petrochemical sites could lead to less capital investment in the region.