PHED flags off MAP scheme to bridge the metering gap

Unveiling the scheme in Port Harcourt, the Chief Executive Officer of PHED, Mr. Naveen Kapoor, said MAP would put an end to the issue of estimated billings as every customer within its coverage area would now have access to the prepaid meter.

Kapoor said under the MAP scheme, customers are to pay the sum of N38,841.07 for single-phase meters, and N70,408.64 for three-phase meters, as stipulated by the Nigerian Electricity Regulatory Commission, NERC.

He added that the aim of the MAP scheme is to bring transparency and integrity in billing through accurate energy measurement that allows customers to manage their consumption efficiently.

“Under the MAP scheme, a third party vendor approved by NERC, based on necessary criteria are granted permits to be the MAP for funding, supplying, installing and ensuring the integrity of the meters. 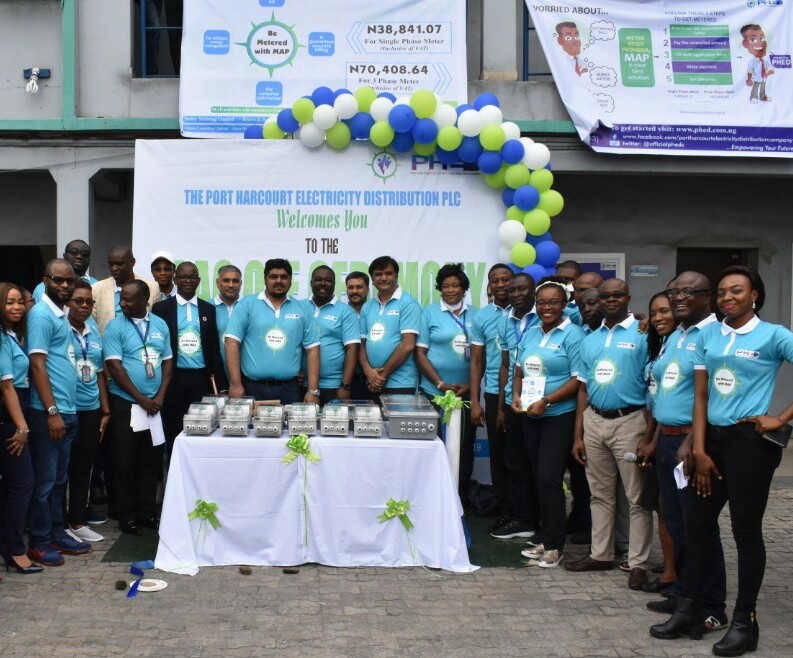 *Management and Staff of PHED during MAP flag-off in Port Harcourt.

“Under the policy, all customers are mandated to be metered and they have to pay for the meters. A harmonized cost of N38,841.07 and N70,408.64 for single and three-phase meters respectively has been determined by NERC for the purpose.

“Continuing the past trend, PHED has wholeheartedly adopted MAP Policy to bridge the metering gap in our network, put to an end this lingering issue between us and our esteemed customers and thereby strengthen our relationship and bond with our customers.”

The Port Harcourt Disco boss also disclosed that two vendors, audited by NERC, Holley Metering Ltd and Armese Consulting Ltd have been approved for the implementation of MAP in its franchise area.

He urged all customers especially unmetered and those having defective meters to participate in the scheme to enable PHED to improve its service delivery.

“PHED has proactively established Bill Reconciliation Camps across its coverage area to ensure smooth and fast track transition of unmetered and defective meter customers who are being billed on estimated. Basis and have outstanding debts payable to PHED.

“We are ensuring questions quick reconciliation of customer’s accounts before migrating customers to the new meter to eliminate any chances billing-related grievances in future.”