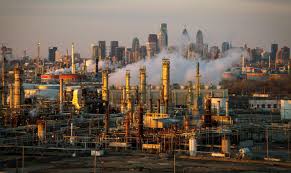 Houston — The planned closing of an oil refinery in Philadelphia damaged by a massive fire last month will reverse nearly two years of capacity gains at U.S. refineries, according to a Reuters analysis of government data.

Philadelphia Energy Solutions has said it will shut its 335,000 barrels per day (bpd) refinery this summer after a June 21 fire tore through a portion of the plant, destroying an alkylation unit.

The shutdown, which began last week and will continue through late August, will reduce overall U.S. refining capacity by about 2%, to 18.46 million bpd.

U.S. refining capacity was 18.8 million bpd as of Jan. 1, according to U.S. Energy Information Administration (EIA) data released last month, up from 18.6 million bpd at the start of 2017.

U.S. refiners have been increasing capacity mostly through debottlenecking and other efficiency gains, even as some smaller plants were idled. The number of U.S. operating refineries last year fell by three to 132 while peak capacity increased by almost 204,000 bpd, the EIA’s 2019 refinery capacity report said.

PES on Wednesday agreed to delay job cuts for some union workers until Aug. 25 after dismissing 150 salaried workers. It plans to secure the fire-damaged plant to allow a sale and possible restart under a new owner.

One of the plants idled last year was Husky Energy’s 38,000 bpd Superior, Wisconsin, refinery, which is projected to reopen in late 2020 following $400 million in repairs from an April 2018 explosion and fire.

About 55% of the U.S. capacity growth last year came at plants along the U.S. Gulf Coast. Refineries in the state of Texas alone accounted for 42% of the increase in a national capacity, according to the report.

The nation’s largest refinery, Motiva Enterprises’ [MOTIV.UL] Port Arthur, Texas, the plant was one of the refineries posting gains, increasing potential output by 4,000 bpd to 607,000 bpd.

The next large expansion in plant capacity is due in 2022 when Exxon Mobil Corp starts up a 250,000 bpd crude distillation unit at its 369,024 bpd Beaumont, Texas, refinery.

Marathon Petroleum Corp is the nation’s leading refiner by capacity with 16 percent of the national total, which is achieved with its October 2018 purchase of rival Andeavor.