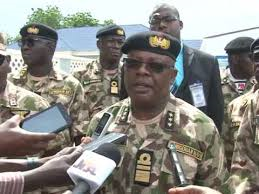 Port Harcourt — Against the background of declining piracy incidence in Nigerian waters in recent times, the Chief of Naval Staff, Vice Admiral Ibok-Ete Ibas, has prescribed pragmatic measures for ship owners and seafarers to adopt in order to improve their safety and security at sea.

Admiral Ibas speaking at the West African Shipping Summit held at the ongoing International Shipping Week in London, advised seafarers and ship owners to employ evasive manoeuvres, optimal speed, use of citadels, use of Safe Anchorage Areas and convoy protection where available.

Represented by the Chief of Policy and Plans, Naval Headquarters, Rear Admiral Begroy Ibe-Enwo, Ibas as buttressed by the International Maritime Bureau, said there have been a progressive decline in the number of piracy attacks with most of these attacks not being successful.

Notwithstanding, the fact that successful piracy attacks occasionally occur in Nigerian waters and indeed the Gulf of Guinea, the CNS called for more proactive actions by the Nigerian Navy and stakeholders in order to rid Nigeria’s maritime environment of all forms of criminalities.

“The decline in successful attacks was as a result of Nigerian Navy’s intensified efforts at securing Nigeria’s maritime environment.

“Most of the issues involved in the security of Nigeria’s maritime domain stem from non-military causes which usually manifest in the form of sea robbery or piracy, economic crimes and theft of hydrocarbon resources as well as other transnational organized crimes.

“We reaffirmed Nigerian Navy’s efforts at emplacing a viable domain for maritime business to thrive by highlighting some NN independent operational engagements established to check criminality at sea which include Operation Tsare Teku an anti-piracy operation, and Operation River Sweep which is an anti-crude oil theft and anti-illegal refining operation.”

While recalling the successes of the two operations in the past three years, the CNS added that the anti-piracy operations contributed to significant improvement in shipping into Nigeria’s maritime environment as attested to by the Nigerian Shippers Council.

He said the anti-crude oil theft and illegal refining operations prevented any stolen crude from being taken away in ships or barges to mother vessels at sea.

“The Nigerian National Petroleum Corporation, NNPC, attested to the successes of Operation River Sweep, confirming huge savings for the nation due to massive reductions in pipeline product losses between 2015 and 2018.

“The Nigerian Navy continues to conduct policing patrols across the nation’s exclusive economic zone and territorial waters employing the advantage of its maritime situational awareness infrastructure to coordinate and direct the pattern of patrols.

“The Service has been able to conduct round the clock surveillance of Nigeria’s maritime space using Maritime Domain Awareness facilities, in addition to surface vessels and helicopters to ensure effective electronic tracking of vessels within the maritime environment.

“National Drug Law Enforcement Agency and other maritime nations and international maritime agencies who had been most supportive in the accomplishment of maritime security for the emplacement of a more conducive environment for shipping and other maritime activities to strive.”