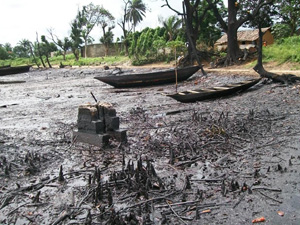 06 August 2014, Abuja – Indigenes of Ogoniland in Rivers State, on Tuesday, demanded $100bn as restoration funds for the Niger Delta to, among other issues, address the clean-up of the area and compensate them for the massive pollution caused by oil spill from Shell Petroleum Development Company’s facilities.

The demand was made in Abuja during the commemoration of the third year of the release of the United Nations Environmental Programme assessment report on the Ogoniland spill.

The Ogoni indigenes also threatened not to vote for President Goodluck Jonathan in the 2015 general elections if he continued to ignore the implementation of the recommendations of the report.

The Executive Director, Environmental Rights Action/Friends of the Earth Nigeria, Dr. Godwin Uyi, in company with representatives of Ogoniland, stated that the SPDC and the Federal Government had failed to implement the recommendations of the UNEP report three years after it was released.

Uyi said, “Shell will not obey the laws of Nigeria and will not accede to the implementation of the report’s recommendations.

“We reiterate our demands, among others, that the Ogoni, in collaboration with other Niger Delta communities and civil society, approach the United Nations to appoint a Niger Delta Reconciliation and Restoration Commission with autonomy and authority to do so.

“We are not only demanding $1bn for the Ogoni environment restoration, but the sum of $100bn as restoration funds for the Niger Delta to address clean-up, restoration and compensation.”

Uyi said since the release of the UNEP report, Shell had disputed some of the findings in it without providing any scientific basis for its claims.

He said the oil major had blamed the Federal Government for not putting in place requisite framework to make it to commit funds to remediation.

“The lack of meaningful action gives the impression that Shell is able to get away with the environmental and human rights abuses in the Niger Delta.”

The National President, Host Communities Network of Nigeria, a body that interfaces between the oil producing communities and the oil firms, Prince Babs-Preye Pawuru, stated that residents of the Niger Delta region would not contribute to the re-election of Jonathan if he failed to implement the recommendations of the UNEP report.

He said, “It is sad that we have a President from the Niger Delta who understands what people in this region are suffering and has refused to act decisively by implementing the UNEP report.

“I will like to let him know that people in the region are watching him and if nothing serious is done as to implement the recommendations of this report and meeting our demands, he should forget our votes come 2015.”

Meanwhile, Shell, in a statement signed by its Media Relations Manager, Precious Okolobo, said the majority of the UNEP recommendations required multi-stakeholder efforts coordinated by the Federal Government.

He said neither the SPDC nor any other stakeholder was in a position to implement the entirety of UNEP’s recommendations unilaterally.

“The SPDC has an activity programme in place, focused on delivering improvements in the environmental and community health situation on the ground. We continue to work with the government, communities and a number of constructive NGOs and civil society groups in the Niger Delta to accelerate progress,” Shell said in the statement.